One Year Later: How hospitals have adjusted to the pandemic

ALBUQUERQUE, N.M. — When the pandemic hit New Mexico, the main concern was the risk of overwhelming our health care system. One year after the first Coronavirus case was confirmed, state hospital leaders said it’s very likely that the worst of the pandemic is behind us.

"I think that we are not likely to get to the point where we stretch the system to that extent," said Dr. Rohini Mckee, Chief Quality and Safety Officer for University of New Mexico Hospital. "However, the one unknown that still remains are the variants."

Hospitals in New Mexico started planning when cases first started spreading in the U.S. At first it was a race for personal protective equipment and trying to set up testing sites.

Dr. Vesta Sandoval, the Chief Medical Officer at Lovelace said their testing started as a doodle.

"We were talking about it and I drew it on the back of a napkin and showed it to one of the engineers," she said. "And we were ready in two days." 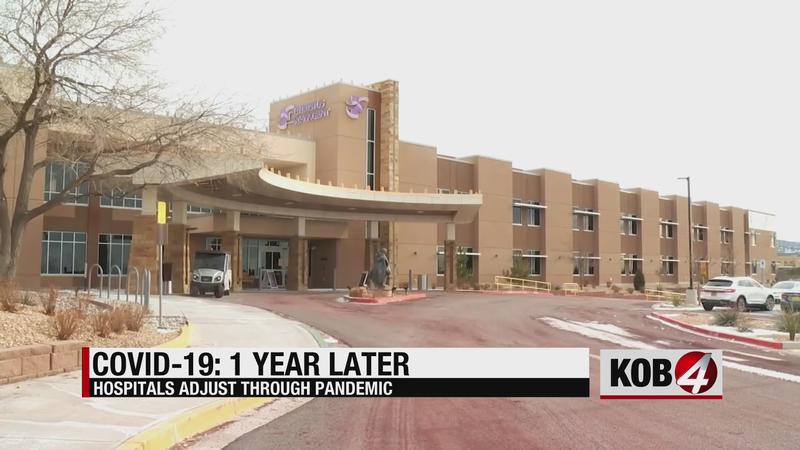 When daily case counts topped the one thousand mark, hospital space became a real concern. Entire floors were converted to COVID units, patients were sent all over the state to where there was available space, plans were made for mobile morgues and old defunct buildings were reutilized.

"We came one, very small step away from Crisis Care," said Dr. Mckee.

Crisis Care is the level when the demand on health care resources is so great providers need to ration care to the most in-need.

New Mexico’s hospitals bent, but did not break. Hospital leaders said because traditional competitors started cooperating and were able to be flexible, they adapted to meet the demands during the worst of the pandemic.