ALBUQUERQUE, N.M. – New data from U-Haul shows more people are moving to New Mexico, but all those people need somewhere to live.

More and more Americans are discovering why New Mexico is called the Land of Enchantment.

"We’re seeing people from the Midwest from the northeast, quite a few California buyers,” said Damon Maddox with the New Mexico Association of Realtors.

U-Haul ranked New Mexico 10th in the number of people moving in, up from the previous high of 14th back in 2015.

"We have definitely seen over the last couple of years throughout the pandemic last year, especially a lot more cash buyers coming in from out of state,” said Maddox.

But those out-of-state buyers aren’t always good news. New Mexico realtors say there are only so many houses to go around, and born-and-raised New Mexicans are often the ones forced to pay more.

“It’s because they’re coming from places where the housing is more expensive. You know, they’ve sold their home, say for California, and they’ve sold that property for you know, eight or $900,000. And they come into New Mexico, they can buy the same size property for about three or $400,000,” Maddox said.

And that’s driving up prices for everyone. The New Mexico realtor’s association says the average home price here in Albuquerque was $336,000 in 2021, a 17% jump from the year before. It’s even worse in Santa Fe, where the median price crossed $500,000 for the first time last year.

So why not increase the supply to meet the demand?

"The issue we have with building houses is the cost of building a house right now. So you know, there are a lot of builders out there that aren’t building because they can’t price that property well enough to make a profit,” said Maddox.

His best advice? Sit tight for a little while.

"The real estate market is always cyclical. We have our highs, we have our lows. If you can hold off right now, I would recommend holding off until you know the market kind of either just a little bit or those prices start coming down.” 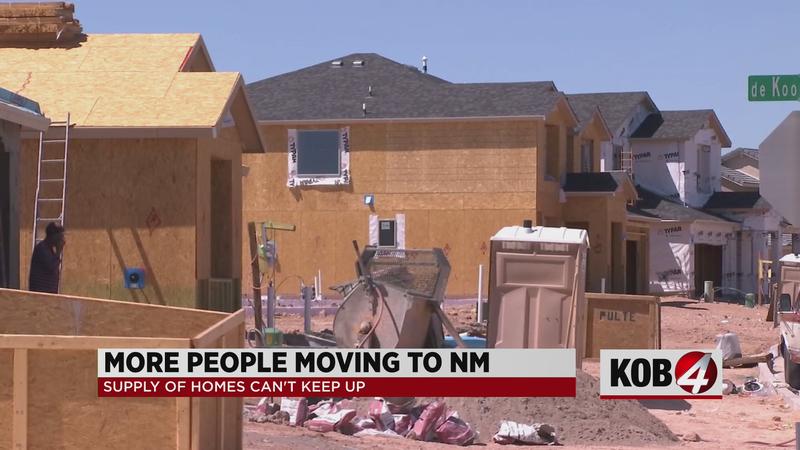