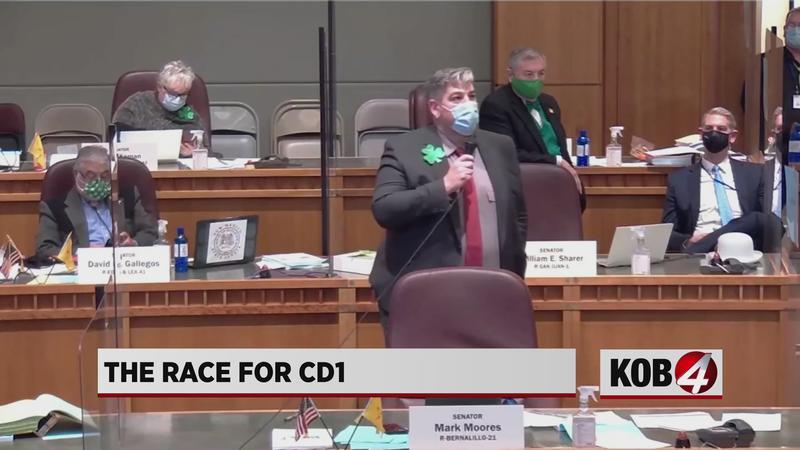 SANTA FE, N.M. (AP) — The Republican nominee for a vacant congressional seat in New Mexico is bringing an unusual perspective to the national discourse over pandemic restrictions and federal relief.

Mark Moores, a state senator and co-owner with his wife of the Roswell-based medical diagnostic testing business Pathology Consultants of New Mexico, has been on the front lines of efforts to trace the spread of the coronavirus since the early days of the pandemic. The laboratory received about $1.8 million in federal payroll-support loans that may not have to be repaid.

As the pandemic took hold, Pathology Consultants operated one of a handful of high-volume testing machines used to analyze nasal swab samples and detect the genetic material of the COVID-19 virus.

“I bring a strong, unique perspective on that, having been on the front lines of the battle,” said Moores, who recalled donning protective equipment to help technicians at drive-thru coronavirus test sites. “We did rapid response (coronavirus testing) at nursery schools, universities. We did a number of businesses around the state.”

COVID-19 test results have been used by Democratic Gov. Michelle Lujan Grisham’s administration to track the virus amid aggressive emergency health orders that limit business activity, and to shut down businesses with repeated infections.

Documents obtained by The Associated Press through a public records request show that the governor’s office scrambled to obtain precursor chemicals for Pathology Consultants to continue virus testing in May 2020.

Moores now says those efforts to restrict business activity have gone too far, as he competes with five other candidates for a vacant Albuquerque-based congressional seat in a June 1 special election. He favors an immediate reopening of the economy in a state that is leading nearly all others in the deployment of vaccines.

New Mexico still requires face masks in public and limits crowding in businesses and indoor spaces, based on each county’s virus infections and test positivity rate.

The 50-year-old legislator and former college football lineman backed a failed bill this year to limit the governor’s authority to prolong pandemic health emergencies. He has combined a conservative voting record on social issues such as abortion with support for major business recovery initiatives by the state that provide minimal-interest loans and $300 million in grants to wounded businesses.

At the same time, he voted against pandemic-relief legislation that provides a $600 tax credit or rebate to low-income workers and a four-month tax holiday to restaurants.

Moores confirmed through campaign staff that Pathology Consultants accepted $1,845,800 through the federal government’s Paycheck Protection Program in two forgivable loans in 2020 and 2021.

He described the federal aid as a financial bridge that helped his 70-year-old business avoid layoffs and continue to track the virus. Orders for diagnostic medical testing dried up at the outset of the pandemic as New Mexico officials suspended nonessential medical procedures.

“We were shut down — about an 80% reduction in business between hospitals and medical offices,” Moores said.

He said it is still unclear whether Pathology Consultants will repay the federal loan. Those loans can be forgiven when spending is focused primarily on payroll, while including a variety of expenses linked to the pandemic.

“We are going through the process right now to see if we qualify for it,” Moores said in a telephone interview.

“This is just more of the partisan hypocrisy that we have come to expect,” Aubrey Dunn Jr., a former state land commissioner and an independent candidate for the congressional seat, wrote in an email.

Moores says he and his company “saved lives during the middle of the pandemic and trying to politicize that is the lowest kind of politics.”

Deb Haaland left Congress to serve as secretary of the Interior Department, prompting the special election for a seat that has been held by Democrats since 2009. State Democratic Party leaders nominated state Rep. Melanie Stansbury to run for the seat. Absentee balloting begins May 4.