ALBUQUERQUE, N.M. – Saturday is game day for the Young America Football League but because of a fight that broke out between league parents last weekend, there will be fewer teams on the field.

YAFL banned the Atrisco and La Cueva teams who were involved in the brawl. The ban includes the parents, coaches and kids.

People within the league have reported multiple brawls over the past few weeks and at least one rough play that sent a young player to the hospital. A video captured a Rio Rancho Rams player throwing a Volcano Vista player on the ground, then kicking him in the head as he walked away, during a U-12 age group two weeks ago.

Deanna Garcia, who said she is the mother of the child who got hurt, made a Facebook post saying, in part, the incident was the first "dirty hit" of the game. According to Garcia, her son was taken off the field in an ambulance and sent to the emergency room. Still, referees deemed the play to be clean.

"The refs were saying ‘It’s clean, it’s clean,’" Garcia said. "My son is laid out. He can’t even say his name at this point." 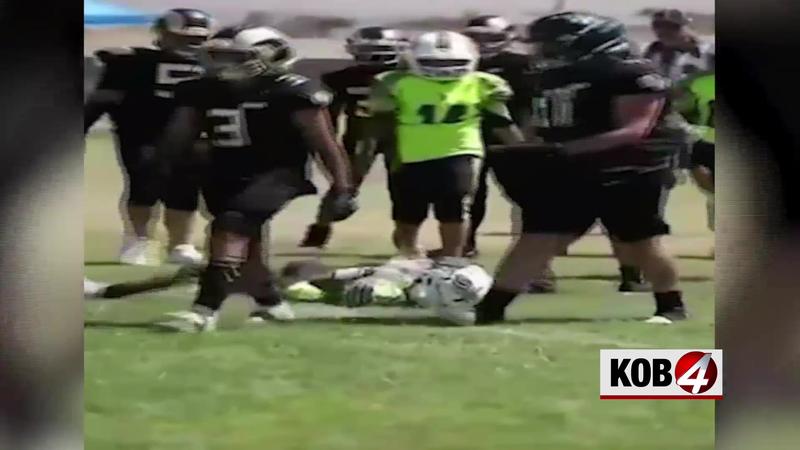 Garcia also stated there were three other helmet-to-helmet hits during the game, which were all considered clean by the refs. She wants the league to take responsibility for what happened and to hire trained officials to make, what she considers to be, the right calls.

"I just want to see the focus pointed back on YAFL and what they’re doing," Garcia said. "They’re the organization that should be protecting our children. The focus shouldn’t be on the parents and the coaches. The coaches aren’t being paid for it and the parents are paying to have their children in this organization so, you know, it should be safe."

Garcia’s son is doing better but still gets headaches. She is unsure of what the long-term effects of his injury will be but she hopes they are not serious or permanent. Currently, her son is not participating in youth sports as he continues to heal.