NEW MEXICO – September is Childhood Cancer Awareness Month and the parents of a two-year-old boy are sharing his story of how their son overcame a rare disease.

Rambo, 2, was born with a rare disease as one of an average of 43 children who are diagnosed with cancer every day in the U.S. Although the disease was not diagnosed right away, doctors suspected something was wrong almost immediately after he was born.

"We were not aware of any medical issues until he came out," Emery Cruz, Rambo’s mother, remembered. "I think it was not even 45 minutes after giving birth when I was trying to walk and I had the nurses telling me to sit down and everything will be okay."

Doctors found Rambo was born without globes in his eye sockets, rendering him completely blind. He also developed mole lesions all over his skin.

"Doctors, nurses, weren’t too sure what it was, so they did a biopsy of one of the lesions," Emery Cruz, Rambo’s mother, said, "and it came out positive for Langerhans Cell Histiocytosis." 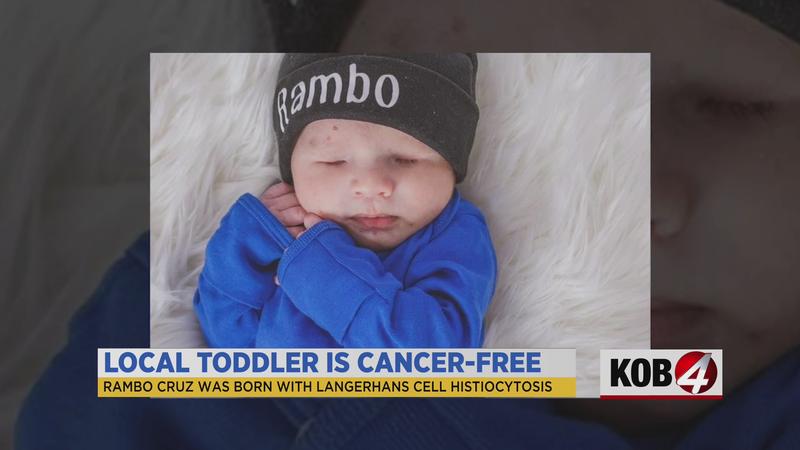 Cruz – the mother of two kids older than Rambo – recalled watching her son deal with blood infections and go through treatments, including multiple surgeries and chemotherapy.

"That was very hard for me as a mother to help hold down my crying child to help the nurses put IVs in and, a lot of times, they weren’t working because his veins were so tiny," Cruz described.

In April, however, she and the family received good news: Rambo was officially cancer-free. In front of a crowd of cheering supporters, he and his family finally rang the bell at UNM Hospital.

"It was amazing," Cruz remembered. "It was something that I was waiting for. He’s taught us perseverance and that nothing that life throws at us should keep us down."

Now, Rambo is beginning school and able to live life after a hard fight.

"He is completely healthy head to toe. He’s going to be starting preschool at the blind school in January," said Emery.