ALBUQUERQUE, N.M. – A 7-year-old at Joe Harris Elementary proves you’re never too young to make a difference in a community.

“’Instead of me getting gifts, I would like to give other kids gifts so they can have a Christmas like I have,” said Emma.

Emma’s family helped her make and sell rainbow keychains, bringing in a thousand dollars for gifts.

"Then this year I saw her in the hallway, and she was wearing a shirt. It looks like this. I told her how cute it was and she told me she was selling them this year to do the same thing to raise money for Carrie Tingley,” said Trujillo.

Emma’s has her own website, where people can make donations or buy "kindness matters" t-shirts.

Emma designed them herself and stuck with the rainbow theme.

"They have rainbows on the t-shirts and all their packaging had rainbows, and she wrote little cards saying ‘thank you’ that had all the rainbows on it too,” said Trujillo. "It’s just something that people don’t really do at her age, and so I was just super impressed and proud because even as adults, there’s not many adults that do things like that, so we’re just so proud of her and we want to support her in any way we can."

So she called KOB 4 to help Pay it 4ward.

"Emma, I’m so proud of you for your shirts that you’ve been selling and we’re going to Pay It 4Ward by giving you $400 to put toward your buying gifts for the kids at Carrie Tingley,” Trujillo said.

Emma says she can’t wait to start spending it on gifts.

"I’m gonna get toys for kids at the Carrie Tingley Hospital. Cause I want to give toys to the kids that can’t afford it– or like can’t get any, that’s what I want to use the money for,” said Emma.

"It made me feel really happy because I like helping people a lot because I think it’s a nice thing to do in the world,” Emma said.

"This year she’s been able to triple her earnings from last year,” said Johnson.

Emma’s goal is to sell 150 shirts by Dec. 15. All the money from donations and shirts purchased after that will go to gifts next year.

The deadline for donation or to buy Emma’s "kindness matters" t-shirts is Dec. 15. Any donations or purchases made after will go toward next year’s gifts. 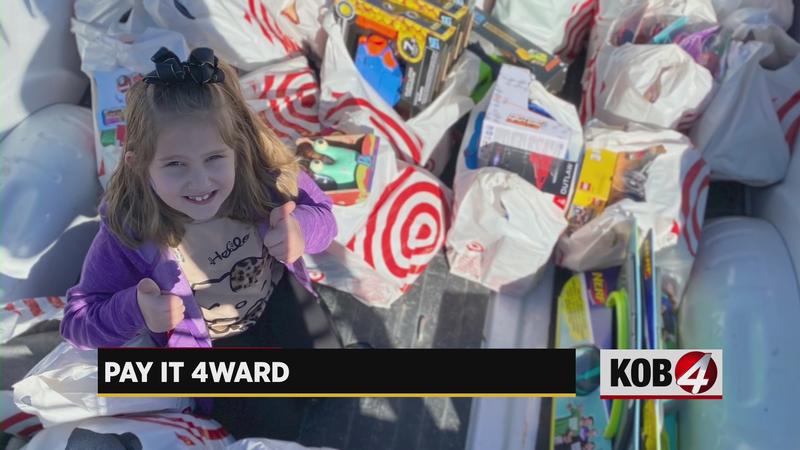