ALBUQUERQUE, N.M. – An Albuquerque man who recently lost his son to gun violence wants to help others going through the same thing.

KOB 4 shares how he uses his art to bring comfort to grieving families across the metro.

"We want to give back to Ryan Saavedra, who worked day and night, getting all of our loved ones’ faces painted on our– on the Twinkle Light Parade, and we just want to show our appreciation because he– you know, all of the pain that we have in our heart, he brought a little smile back to that," said Josette Otero, Pay It 4ward nominator.

The New Mexico Crusaders for Justice, is a support group in Albuquerque for those who have lost loved ones to gun violence.

"We’re also out there fighting to have the laws changed, but today we’re here for Ryan,” said Sally Sanchez co-founder of New Mexico Crusaders for Justice.

"I do miss him and I love him,” said Saavedra, Pay it 4ward nominee.

To honor his son and others who were taken too soon, Saavedra decorated a parade float with their portraits.

"My son was Kyle Martinez and he died in April, 22 of 2020, also to gun violence, and he just made my son shine so bright." said Otero.

Saavedra used all of his own materials and time.

"It’s hard, but I believe with the pain he had in his heart, he was able to draw the faces of all of our kids, and put so much love into that, and I just believe he deserves– he deserves a lot more than we’re giving him, but I want him to know that he was appreciated," Otero said.

It was only natural to Pay it 4ward to Saavedra with $400.

"Thank you so much," said Saavedra. I only did it because you guys feel the same way as I do. We’re all hurting and we all need this. I still got a lot of faces to do I think. I got a lot of smiles to put on faces that have frowns. You know it’s a sad situation we’re in that we had to meet this way. That I had to show you guys I have this in me. This ability, and I’m going to use it for our kids." 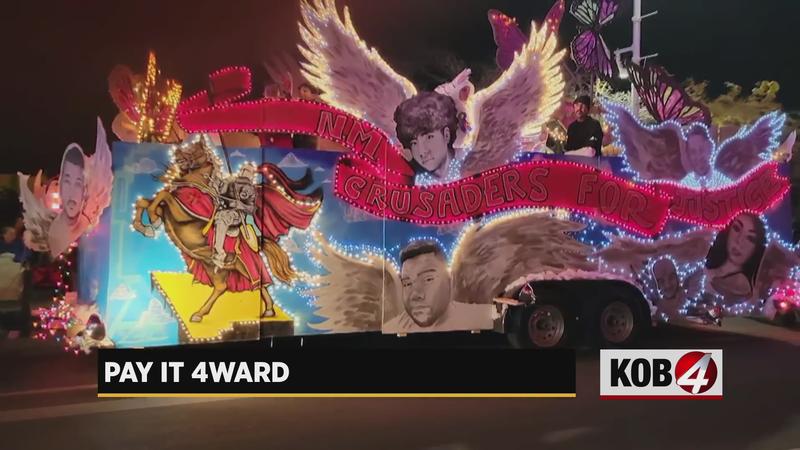