ALBUQUERQUE, N.M. – An Albuquerque man is working hard to help nonprofits succeed – and encouraging people to enjoy some good food along the way.

Justin Gomez, founder of Burque Taco Club, has been spending a lot of time helping nonprofits since the beginning of last year.

The members of the taco club, choose a nonprofit, raise money for it on Facebook, set up with a venue, and often with a taco truck. Last week, the nonprofit raised hundreds in donations, and valuable visibility.

Stephanie Griego, Volunteer Program Director of Rape Crisis Center of New Mexico, knew she had to Pay It 4ward to Gomez.

"I just think Justin is a very kind-hearted young man, his heart is there,” said Geigo. “Knowing him has made me a better person."

She watched him put on an event to benefit the Rape Crisis Center of Central New Mexico.

"He’s gone out of his way to help nonprofit organizations, bring awareness to their cause. It’s more like a cardiño (sweetheart) thing, a New Mexico thing. He cares, and that made me care more about him,” she said.

Griego told Gomez KOB 4 was there to only talk to her – a little white lie.

"I’m in shock. I don’t know what to say,” said Gomez. "It’s just such a heartfelt thing to do. I know Stephanie gives her everything. To see her Pay it 4ward, and really just take a second and recognize, I just appreciate that so much."

Gomez already knew what to do with the extra $400.

"I’d love to just Pay it 4ward to the Junior League. Yeah, yeah. They use this money for their diaper bank, and it goes to families who need diapers. What better time than to give it right there,” he said. “ I really think nonprofits really bring a lot to the community and fill a lot of the cracks and creases that we really need, that really help bring us up. People want to come out. People want to just enjoy some tacos, have a good time and know that it’s going toward something.”

Just another way some tacos — and a lot of hard work — are benefitting those in the community. 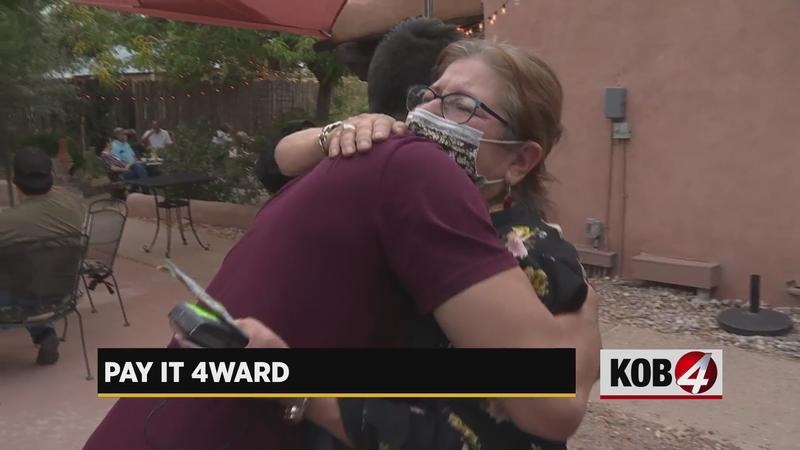