ALBUQUERQUE, N.M. — On donation days at Buttercrust Pizza, each pie comes with an act of kindness.

“It all started last January when a family out here lost their two children, and we wanted to do something to help out so we did a donation day and 50% of our profit from that day went to the family of those other children. And then it just kept going from there,” said Sarah Wright, owner of Moriarty’s Buttercrust Pizza.

They call the program Trinity’s Love, which is the name of the owners’ daughter at Buttercrust. Since it started, they’ve been able to help more than a dozen families.

“We have four boys, and she was our only daughter when we lost her when she was six weeks old. So we want to do something for her to honor her, so that’s what we decided to do,” Wright said.

Because of Wright’s generosity, her close friend Sarah Brewer reached out to KOB 4 to nominate her for Pay it 4ward. 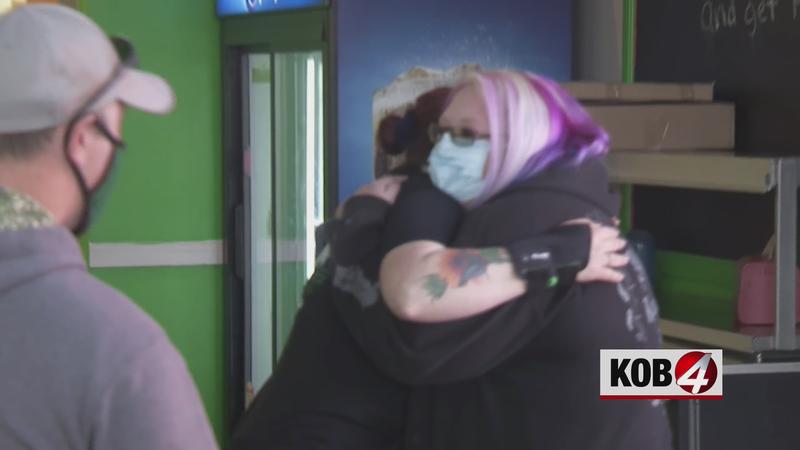 “She just wants to all the love to be spread as far as it can go, and that’s how me and her first met was through a donation day and she helped us through a struggling time and we’ve been friends ever since,” Brewer said.

Whether it’s helping someone through a tragedy or helping a family have a better holiday, Buttercrust Pizza lends a hand year round.

“About three years ago, and it was about Christmas time, right around Christmas, and we were in between jobs and there was just a lot going on, and she called us,” Brewer said.

Now, Brewer is hoping to return the favor.

“Sarah is really good to the community. She does donation days, which are really a huge, huge help for a lot of people. She’s deserving because she has a kind heart, and she’s very caring to everybody around her,” Brewer said.

Like most restaurants, Buttercrust has been struggling during the pandemic.

“It’s been a roller coaster, but we’re hanging in there,” Wright said.

Wright said the $400 from Pay it 4ward came just in time since they’re planning on opening a coffee shop in early March.

‘I’m grateful. I’m shocked. I never expected anything like this. My husband and I love helping everybody out here,” Wright said.

And it’s clear that that their community loves them too.

“It’s a tight knit community. Everybody’s there for each other,” Wright said.