Pay it 4ward: Farmington woman recognized for generosity during pandemic

FARMINGTON, N.M. – A woman in Farmington is always giving back to her community – especially after the pandemic struck.

Connie Maestas, owner of Cabana Tans in Farmington, bought the place in the middle of the pandemic. And she knew that she wanted her business to be more than just a place for tanning.

It all started in October of last year with a Halloween drive-through, where she and others gave out candy outside Cabana Tans.

Then in November she got some donations and she was able to provide Thanksgiving meals for families in need.

"And then we did Christmas. We had a friend of mine come in and was our Santa Claus and we invited others to come and help us. We did it by appointment COVID safe, had children and families come in here with Santa. Took pictures and we gave them cookies and little trinkets and people donated and we took presents and things to Childhaven that year from everything we got from that,” Maestas said.

She also did a similar fundraiser for Easter this year. And her generosity has not stopped- the fundraisers have kept going-she has even allowed people to fundraise through her business and her good deeds have not gone unnoticed.

"She’s constantly doing for everybody else she never wants to be in the limelight other people have taken the credit for things that she’s done and she’s always told me don’t say anything because God don’t bless ugly so I decided you know what, it’s time for somebody to see what she actually does,” said Dashelle Ricord, Pay It 4ward nominator.

For Maestas it’s not about getting attention, it’s about making her community a better place.

"I just want people to be happy, the world is terrible right now. It’s not about me, it’s about giving to others,” said Maestas.

She said she plans on donating the money. For this holiday season she plans to feed more families, she’s even raffling bikes. Money collected there will go towards helping veterans in need. 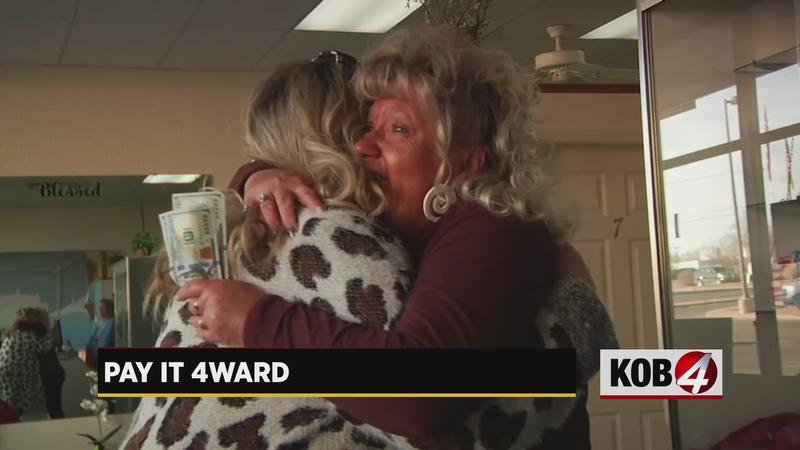