ALBUQUERQUE, N.M. – Purse, pocketbook, tote – whatever you call it, a lot of women don’t leave home without it. Unless, maybe you don’t have the means to fill one.

KOB 4 is helping Pay it 4ward to someone who is trying to make sure every woman who needs one, has a new purse full of necessities – just in time for Mother’s Day.

"From shampoo and conditioner, lipstick, brushes and combs, jewelry. Head to toe, anything a woman would need," said Janette Wiggins, Pay it 4ward nominator.

Wiggins is a purse packing pro, she started volunteering with “Pursonalities Plus” a few years ago. The organization collects gently used purses, fills them with toiletries and other goodies, and sends them off to shelters, housing abused and homeless women as well as those who recently got out of jail.

"They’re just over the moon with joy and thankfulness. So it’s very rewarding, very rewarding for all of us who are involved in this," said Wiggins.

Including the woman who started it all back in 2016, Jane Bickelman.

"She has a heart for these women, and she is literally a blessing from God to this community," said Bickelman. "She deserves $40,000 for what she has done."

$400 will have to do for now. Bickelman had just been putting the finishing touches on hundreds of bags going out to women just in time for Mother’s Day.

Bickelman had no clue what her idea would lead to when she dreamt it up with her hairstylist six years ago.

"We prayed for 50 purses, I wrote 22 emails, and Sarah told her clients, and we got 180 purses, first year," Bickelman said.

They’ve since partnered with Albuquerque police to deliver more than a thousand purses at Christmastime, and several hundred around Mother’s Day.

Officers take them to more than two dozen facilities across the city.

“Someone said, ‘it’s just a purse.’ But you have no idea what it means to women who have limited or nothing," Bickelman said. 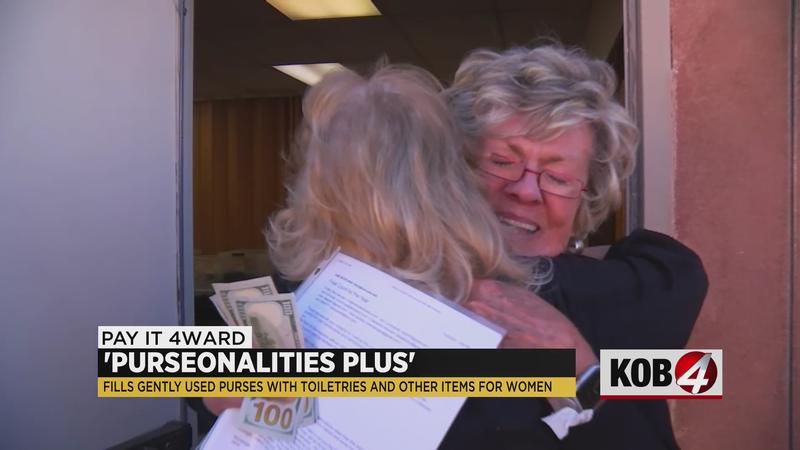