ALBUQUERQUE, N.M. – One man is giving back to the community and making sure everyone has toys to play with the next time they go to the park.

How long would a community box of toys last in a park? In this week’s Pay It 4ward, we’re meeting Mark Timms who wanted to experiment with that idea and so he and his son made a homemade toy box. His plan? Stock the toy box weekly, for six months.

"He does that once a week Friday night now he’ll come out, and he’ll check his toy box and fill up what they were missing, pick up whatever is on the ground if there is any," said Dorris Goodman, Pay it 4ward nominator.

Goodman, Mark’s aunt, who brought the whole family in to surprise him and Pay It 4ward.

"He has a big heart of gold and I love Mark and there isn’t anything he doesn’t do for people, he’s a giver," said Goodman.

KOB 4 and friends got to give back to this giver. Mark thinks he’s on a quick pit stop at the park.

"Well Mark we’re here to surprise you with $400 to give you a thank you, for doing this wonderful community project," Goodman said.

Surprises are cool, but Mark is even cooler most times, the toys are never returned,but he still comes back every week with more.

"It’s been fun, there’s been times when I’ve stocked it and then the next day all of it was gone. But it happens and that’s part of the experiment, sort of experiment slash project. And then other times balls have shown up and so that’s been really cool so it’s been a fun blessing," Timms said.

Now with an extra $400, Timms said this experiment can go on even longer, and in the future he hopes to expand to more parks across the city. 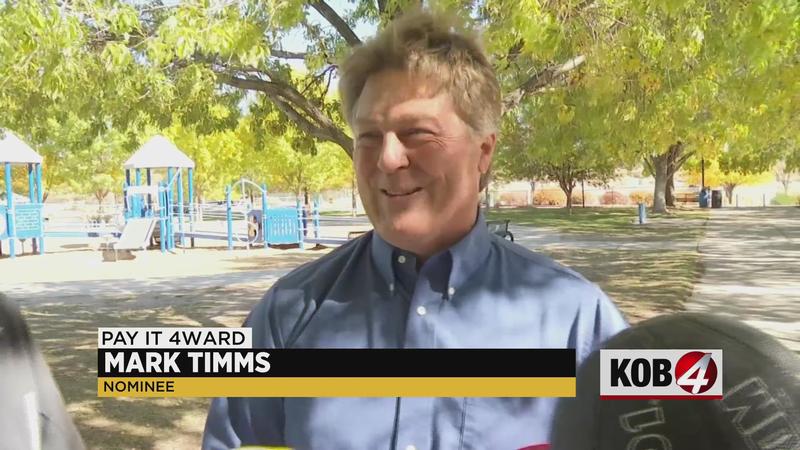