Pay it 4ward: Stylists plant garden for their boss recovering from multiple surgeries

ALBUQUERQUE, N.M. – One woman spotted an especially good deed while out on her daily run around the neighborhood.

"I absolutely run by here every day, but I saw James watering a garden, and I thought, ‘this is a center that needs a little TLC. Why is there a garden?’” said Blake Graves, nominator. "He let me know that the owner of the salon, Trish, had cancer and had five surgeries in one year. And with that, they felt like maybe she needed a little surprise when she returned, and so they planted this beautiful garden."

James Torres and Mary Dorrance said they knew their boss would be weak when she returned to work and probably would only be able to work part-time.

"But the time that she did spend here, they just wanted to make sure that she was happy and she was loved,” said Graves.

Blake was so impressed by the garden James and Mary planted for their boss, she contacted KOB 4 to help Pay it 4ward with $400.

Blake told James and Mary they were having their picture taken for something else.

"I know that your owner is Trish, but that’s also your sister and your friend, and I know that you feel for her having had so many surgeries. So as a thank you, I just want to thank you guys with a little bit from channel 4 and pay it 4ward, so are you ready? Mary, thank you so much for making our little area so beautiful, and thank you so much,” Blake said.

"James decided that we should build a garden for Trish when she comes back after her six months gone. So every day we were adding a tree, a plant, a bench," Mary said.

"We just started planting stuff from the dollar store actually, if you want to know where we got it from, the little boxes, and put it in, and just started watering,” James said. “And it made her joyful when she came by, and her husband would drive her by to look at it."

Planting a garden wasn’t the only way James and Mary helped Trish, while she was recovering from multiple surgeries.

"What we did, James, myself, and another employee — we did her clients for her and during all this time that she was off, the proceeds went to her to keep the salon going,” said Mary.

Mary said Trish is doing a lot better, and she’s now back at work part-time.

"As I say, we need to show more love, not only to our friends and our relatives but to the neighborhood, because again, it’s thoughts like this, it’s expressions like this, that encourage us to keep a smile going, so thank you,” Blake said.

"Thank you. Yeah this is wonderful,” Mary said. 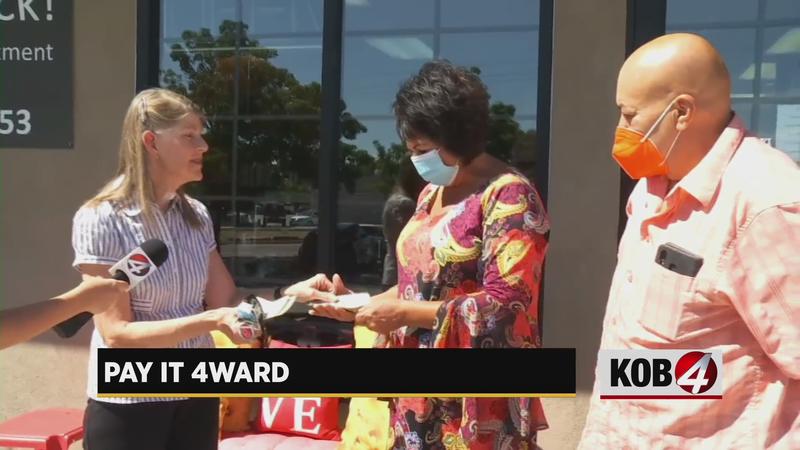