Pay it 4ward: Vietnam veteran thanks woman for warmth and welcome

ALBUQUERQUE, N.M. – It’s been decades since the Vietnam War, but for many veterans, they look back on that fight, and the lives lost. The journey home is still very painful. For years, an Albuquerque woman has gone out of her way to make these veterans feel welcomed.

Dennis Chavez comes from a family of veterans. His dad has a Purple Heart, served in World War II and the Korean War.

“Pretty much all the men in my family have served our country,” said Chavez.

In the 60s after high school, Chavez also joined the military.

“I did two tours in Vietnam. I was in the Naval Air Force, I was in a patrol squadron that hunted submarines in the Bay of Tonkin,” Chavez said.

Then, when he and his fellow veterans came back to the United States.

“We didn’t get a welcome home parade. Nobody welcomed us home, nobody recognized us for what we did and how we served our country because it was an unpopular war.”

Nobody, except for each other and those who also served in Vietnam. And that’s how things were for decades until a few weeks ago, while eating dinner, Chavez was surprised with an act of kindness.

“A gift. Handmade gift. Somebody that took time to do it and that reached out to me because I was a Vietnam vet and they were actually welcoming me home.”

That somebody was Liz Martinez, a quilter, who had a personal connection to Vietnam vets. Printed on the American flag were the words Chavez had been waiting to hear.

“When I see something like this, it’s been 50 years. Over 50 years and somebody welcoming me home. It means a lot. It’s my parade, so to speak,” said Chavez.

That’s why Chavez decided to Pay It 4ward with $400. Of course, Martinez was busy making more quilts when we surprised her.

“You deserved it. You’re a Vietnam vet,” said Martinez. “My husband. My husband he was a Vietnam vet and he told me the stories of when he came home and how they were treated, so when I started sewing I told him I think my purpose is to make quilts for Vietnam veterans.”

She’s been quilting for 16 years and can’t count how many of these she’s given out.

“We would go to a restaurant and my granddaughters would- I’d tell them, ‘go look and see if you see anybody wearing a hat, like their grandfather, and you choose them this time.’ And they did and that’s how they got their quilts,” Martinez said.

She’s used to surprising others, but this time was different. 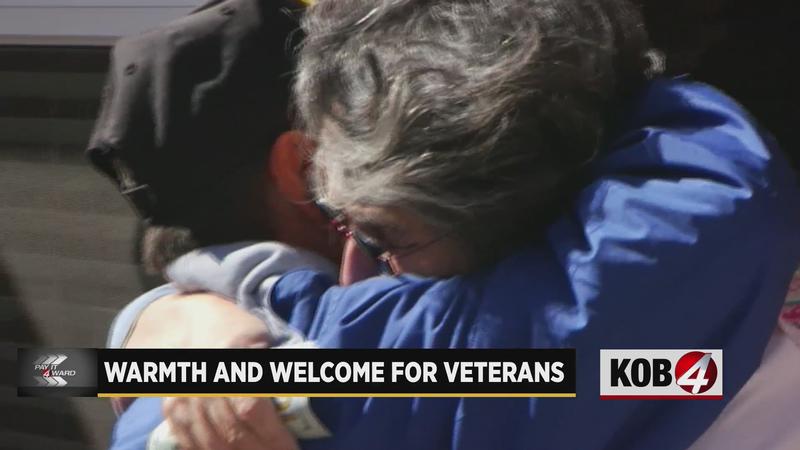