They have a team of volunteers and vets right here in New Mexico to make it all happen.

"I’ve nominated my friend Diane Kimbrell Howell for the Pay it 4ward program because of the work her and her husband have done with the Greyhound Adoption League, the New Mexico chapter,” said Waneta Petree, Pay it 4ward nominator.

Howell and her husband Todd have rallied more than a dozen foster families and volunteers to help find families for these dogs.

“They’ve been they’ve had the league open in Albuquerque for about 4 years, and they just surpassed their hundredth adoption,” said Petree.

And they’re not only finding homes for greyhounds.

"Basically, they drive all over the Southwest, relaying dogs. They may not always keep the dogs, they may get the dog, transport the dog here, relay it to another volunteer who will then take it to another foster home or the place where they’re going to be, their forever home,” Petree said.

She said she was friends with Howell long before she started with the adoption league.

"Well, she’s kind of like my little sister. We’ve known each other for probably 15 years here in Rio Rancho, we’re neighbors and live nearby,” said Petree. "I’ve just watched her with this for the last four years and I’m amazed at the work she does, and both of them do because it’s a lot of work to rehome these dogs."

“I came to Pay it 4ward with the help of TV 4, we came to recognize you and the Greyhound Adoption League that you run here,” said Petree.

Howell said none of this would be possible without volunteers, foster homes and donations to pay vet costs.

"It’s kind of funny, people always think it’s just about the dogs, but it’s kind of people work too, right? Getting people hooked up with companions who can kind of fill up their heart and make their family complete. Like they do for us. Don’t make me cry. But that’s really it, it’s people work and it’s dog work too." 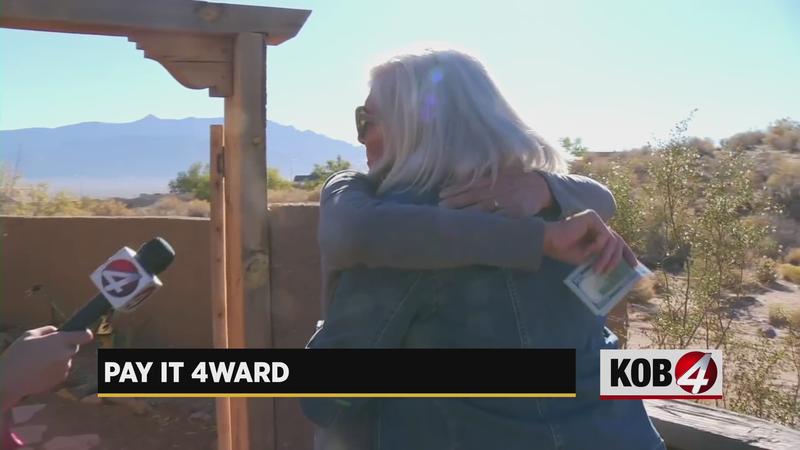