Pay it 4ward: Woman thanks friend for life-saving gift

ALBUQUERQUE, N.M. – We all hope that we have a friend we can count on when times are tough for us. For one Albuquerque woman – who needed a lifesaving kidney transplant – that friend’s name is Natalie, who after years of not finding a donor stepped up to give her friend a second chance at life.

Lucy Reyes had her life change forever in an instant.

"11 years ago, I was diagnosed with diabetes and kidney disease at the same time,” said Reyes.

A wife and mother battling a chronic illness that was starting to win.

"I was in the hospital every two months. I was always very tired,” Reyes said.

To the point where, in 2015, she had to stop working. Doctors told her she needed a new kidney.

In that time there were potential donors.

"I had about six people get tested to be a live donor because for my particular blood type it takes eight to ten years to get a deceased donor."

Unfortunately, none of them were a match.

So she had to get creative, putting magnets on the side of her car and handing out business cards wherever they went.

Still, no luck. Reyes’ hope was starting to run out.

"After so many times, you kind of don’t believe it’s going to happen."

Then two years ago, Reyes’ friend of 13 years, Natalie Vigil reached out to her.

"Sent me a text saying ‘I want to get tested for you, what do I need to do?’ I was just blown away."

While Reyes was incredibly grateful, she didn’t get her hopes up right away. Not wanting to be disappointed once again. But after months of testing, doctors told Reyes the words she’s been waiting years to hear.

Vigil was a match and Reyes was going to receive her kidney. They attended doctor’s appointments together and even had a countdown until the surgery. A surgery that was successful, giving Reyes a second chance at life.

"It means everything to me. She gave me the gift of life because of her I got a second chance at life. I have two grandbabies one that is four and a half years old and one that is five months old and I get to be here with them longer to see them grow up."

Both are now recovered, and Reyes has tried all she could to pay her friend back.

"Every time I offer something, she is like ‘we are good we are good you guys need it, You need it more that I do we are good.’ I just always feel like there is something I want to do for her."

That’s why KOB 4 met with Reyes to help Pay It 4ward with $400. Vigil had no idea what was about to happen.

“I love you. I just want to thank you for everything that you have done, that you continue to do and for giving me this beautiful gift of life,” said Vigil. "This is Paying it Forward on Channel 4 and I know you couldn’t say no to them."

Vigil said she just wanted to help her friend live her life.

"When I first found out that I was approved that this would happen I cried I cried and I called her right away. And we cried together and I just I was in disbelief and I was excited that I could do this for her."

Hoping others would do the same if they were in her situation.

"If you can donate life, please look into it. It was an amazing and beautiful thing and I was so I happy I was able to do this," said Vigil.

"We have a bond that will never be broken. We are sisters now," Reyes said.

In New Mexico, there are currently 700 people waiting for a life saving organ. If you want to be like Vigil and help those who need it, you can learn more by going to donatelifenm.org. 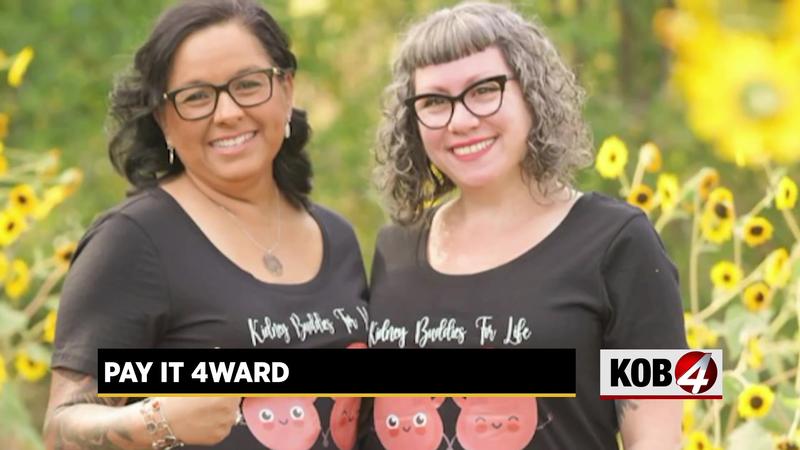