FARMINGTON, N.M. -The sound of wind sweeps over the Four Corners each spring, but it isn’t the howling noise that’s the nuisance, it’s the danger associated with strong winds.

Deputy Chief David Vega of the San Juan County Fire and Rescue says ignition sources for a fire are all around us.

“You can see in the back of me, we got a lot of cured fields that available for a fire so, right now, the fire situation is high and it’s a pretty dire situation,” said Vega.

One spark could light up the field.

This level of fire danger is what Vega describes as “abnormal” for April.

“Three to four weeks ago we did have a fire that went over 100 acres out on the west-side of our county and that fire was burning in Bosque fields. So, the fuels that are along the river (were burning), that fire was a wind-driven fire and typically we don’t really see 100 acre fires this early in the year,” he said.

Helping to put out fires in a 5,000 square mile stretch of land is not easy.

“If you do have a small fire and obviously that fire is being pushed by winds, it does create some challenges being so vastly spread out, sometimes it takes us a little while to get to fires, (that time) allows the fire to grow until we have enough resources on scene to suppress it,” Vega said.

Vega added that San Juan County Fire Department is focused on reducing any accidental ignitions sources, which includes the possibility of limiting the sale of certain fireworks in the coming hotter and dryer months. As well as issuing a burn ban until further notice, which happens to be the leading cause of a wildfire in the area. 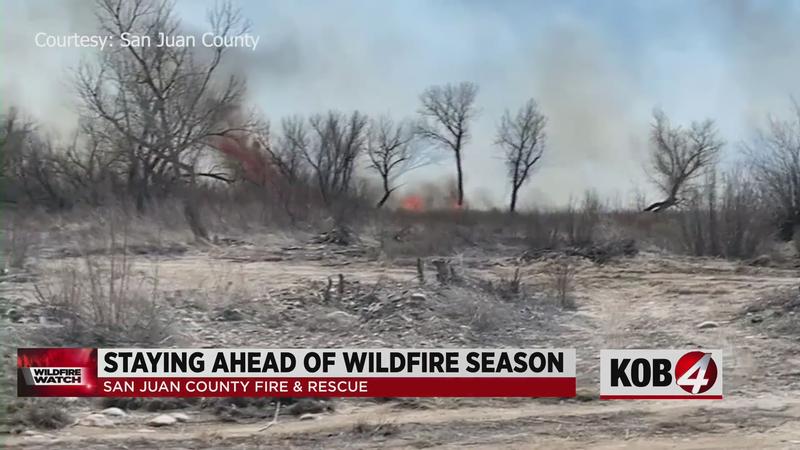