ALBUQUERQUE, N.M. — Albuquerque may soon lose its title of hot air balloon capital of the world. Local balloon pilots say newly-enforced FAA regulations are severely limiting where balloons can fly in the metro, and it’s threatening the local ballooning industry.

The regulations require all aircraft – including hot air balloons – to be equipped with a special device called Automatic Dependent Broadcast Surveillance in order to fly in Class C airspace. Albuquerque’s Class C airspace (pictured below) stretches from Isleta Pueblo up to Rio Rancho.

Appelman says his pilots have to navigate around that airspace, which covers many popular tourist spots – including the Rio Grande and Sandia Mountains.

“Since we don’t have steering wheels, sometimes the winds we need are a little bit higher than that. And if we go into that area, we can be violated, for violating for, you know, breaking the rules, which could mean suspension or revocation of our license” Appelman said. 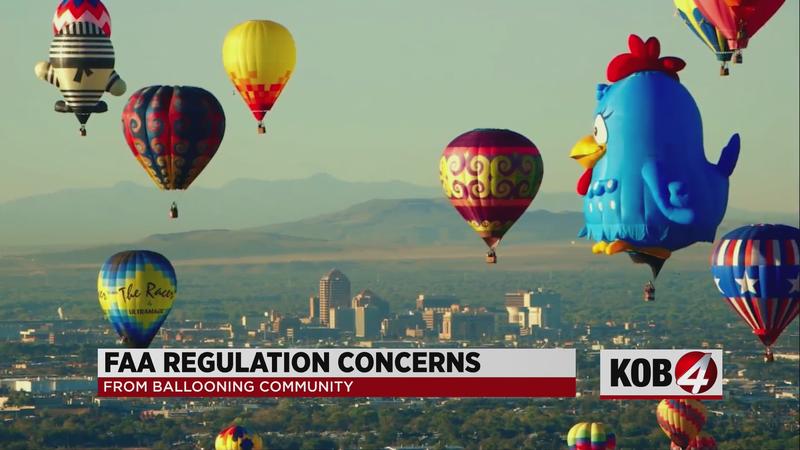 Appelman says the rules have been on the books since 2020, but were not enforced until September of 2021.

"This type of requirement over the city of Albuquerque, in what I would consider arbitrary timing has a lot of questions,” he said.

"The Albuquerque International Balloon Fiesta is focused on creating a safe event for our pilots and guests. This is best achieved by allowing our balloon pilots year-round access to fly and land along the Rio Grande valley. The event’s leadership has communicated its concerns to Albuquerque Air Traffic Control Center and Federal Aviation Administration. Balloon Fiesta’s concerns are rooted in providing a safe flying event. A very workable and reasonable approach to this has already been implemented in Colorado Springs. The event is committed to resolving the issue through discussions with federal officials."

“I’ve already been approached by two other cities, saying that if this goes away, we’re happy to help host. Now, it’s not like I make the decision of Balloon Fiesta, no way” he said. "All I can say is a $200 million impact. There’s a lot of cities that would love to be able to support an event.”

Appelman says he has already been in contact with U.S. Rep. Melanie Stansbury about his concerns. Her office sent us KOB 4 statement about the situation:

“Every morning during the Balloon Fiesta, New Mexicans run outside to witness the incredible sight of hundreds of balloons of all shapes and sizes dotting our turquoise sky. The Balloon Fiesta and our balloon pilots who keep this tradition vibrant year-round, is in Albuquerque’s DNA. As we speak, my office and I are working closely alongside our balloon pilots to keep our balloons in the air for years to come. I look forward to working with the Federal Aviation Administration to safeguard the absolutely vital economic and cultural institution that is our Balloon Fiesta and hot air balloon community and I cannot wait for this year’s Mass Ascension.”

Appelman says modern day balloon was re-invented in Albuquerque nearly 50 years ago, and just wants to make sure the industry is not forced out of its home.

The FAA shared the following statement with KOB 4:

"FAA regulations allow operators to fly balloons that aren’t equipped with Automatic Dependent Surveillance-Broadcast (ADS-B) if they remain outside of certain airspace, including the class of airspace around Albuquerque International Sunport. Applicants may request a waiver from the local FAA air traffic facility to operate in this airspace."