ALBUQUERQUE, N.M. – Police are investigating two deadly shootings and crashes after a violent night in Albuquerque.

One person was killed around 4:30 a.m. Sunday morning at an apartment complex near Jefferson Street and Alameda Boulevard.

Officials say a woman was knocking on her neighbor’s door, saying she stabbed her boyfriend after he attempted to stab her, and asking them to call 911. Upon arrival, police discovered a man deceased inside the woman’s apartment. The woman was transported to the hospital for injuries.

The woman was identified as Michelle Morgan, 40. Morgan is charged with second-degree murder after she reportedly stabbed her boyfriend as many as 30 times in his face and his feet.

This is an ongoing investigation.

Hours before that, around 11 p.m. Saturday, two people were shot and killed near Girard Boulevard and Constitution in northeast Albuquerque.

Police say officers were notified that two people were shot inside a residence. When police arrived, two individuals were discovered dead with apparent gunshot wounds.

This is an active investigation.

Police say a motorcyclist died after they slammed into a blue BMW making a left-hand turn. The motorcyclist succumbed to his injuries on scene.

Police believe speed was a factor on the motorcyclist’s part. The other driver involved was also reportedly driving with a revoked driver’s license. No charges have been filed at this time.

Just five miles west, APD was called out to investigate another deadly crash along I-40 near the Louisiana exit.

APD says a Dodge Charger was traveling westbound when it slammed into the back of a semi truck. The Dodge Charger driver died at the scene. The person driving the semi was checked and not hurt. 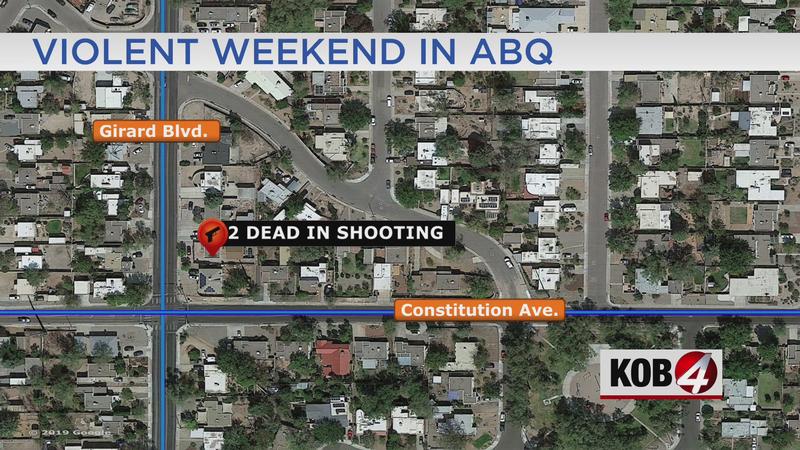