Note: The video above includes graphic content that may be disturbing for some viewers.

ALBUQUERQUE, N.M. — Albuquerque police said 52-year-old John Dawson Hunter was suffering from a mental crisis when he shot three people driving by his house. Police later shot and killed him.

According to APD, Hunter shot and killed 31-year-old Alicia Hall in a random attack as she drove her van past his house. The shooting was caught on a neighbor’s security camera. Police synced the video to a rambling and incoherent voicemail that Hunter was leaving a family member at the same time.

Police said Hunter was firing a rifle through the windows of his home.

Police also said a 15-year-old girl was shot in the neck as Hunter fired shots from his house. 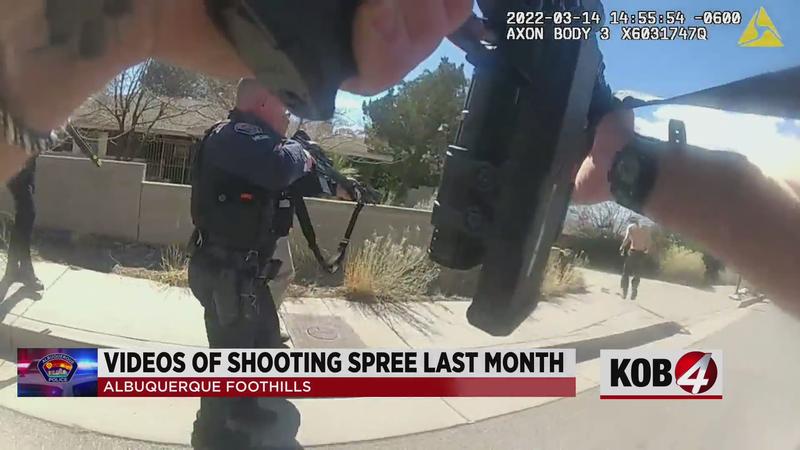 An officer’s body camera video shows the moment another driver – who was also shot by Hunter – flagged him down for help.

Officer: Has someone been shooting at you? Were you hurt?

Victim: Somebody (expletive) shot me with a shotgun as I crossed that intersection.

Officer: Is it coming from his house or not?

Victim: I don’t know. Right as I crossed that intersection he blew the (expletive) window out.

Police officers said they heard Hunter yelling at them from a window at his home. When he exited his house, they thought he was surrendering. When he advanced toward the officers, officers hit Hunter with beanbag rounds. Instead of complying, police said Hunter reached for two guns on the ground – forcing police to fatally shoot him.

The man and the teenage girl who were both shot survived. Police said Hunter wasn’t on their radar because they hadn’t had any contact with him in the past.

Here is APD’s timeline of the shootings and the response that developed over the course of about 40 minutes:

2:14 p.m. Hunter was leaving a voice mail for a family member when he decided to go to another area of his home and start shooting a rifle through windows and toward the street. He shot from his home as vehicles approached the intersection of Montgomery and Glenwood Hills NE.

A 2011 Toyota Sequoia was struck twice. One projectile struck the windshield of the Toyota and traveled through the vehicle and exited the rear window. The second projectile impacted the Toyota on the driver’s door, just below the side mirror. A 15-year-old girl was struck on the left side of her neck by a bullet fragment.

Alicia Hall drove east on Montgomery NE in a 2005 Chrysler Town & Country van. Alicia began to slow for the stop sign at Glenwood Hills NE. Mr. Hunter discharged four rounds at the van. Ms. Hall was struck by at least one of the projectiles and succumbed to her injury.

2:17 p.m. First 911 call from the driver of the Toyota Sequoia who reported someone shot at his vehicle and his daughter was bleeding.

2:20 p.m. The first officer reported she was on scene where the Toyota Sequoia was stopped on Montgomery Blvd across from APD’s Foothills substation. She checked on the victim and reported she did not see an offender.

2:23 p.m. A second officer, who is a trained EMT with APD’s SWAT Unit, arrived and provided aid to the injured girl. That same officer was later injured during the shooting with the offender.

2:27 p.m. An APD supervisor told officers at the scene to treat the incident as an active shooter.

2:28 p.m. Another citizen pulled up to the stop sign at Montgomery and Glenwood Hills, and Mr. Hunter fired three rounds at this vehicle. The male driver sustained minor injuries.

2:35 p.m. Officers identified a home on Montgomery Blvd. as the target residence where they believed shots were being fired.

2:41 p.m. Officers determined the driver of the Chrysler Town & Country van, later identified as Hall, had been shot. An officer eventually gets close enough to the vehicle and determined Hall was deceased.

2:46 p.m. There are reports of a male, later identified as Hunter, who was walking with a gun, and later with a knife and a machete. Investigators later determined Hunter had a large piece of glass that was cut in the shape of a machete.

2:52 p.m. Officers reported that they heard Hunter yelling at them from the window in his home. He exited the house a minute later.

2:54 p.m. Officers approached Hunter, who they believed was surrendering. Hunter suddenly got to his feet and advanced on officers. Three bean bag rounds were deployed, but did not have the desired effect. Hunter walked over to two handguns on the ground, began to pick one up, at which time three officers discharged their rifles (12 rounds total). At least one projectile struck Mr. Hunter and stopped his actions.