ALBUQUERQUE, N.M. — A police service aide and a brave neighbor are both credited with saving the lives of two of the four officers wounded during last Thursday’s shootout with a robbery suspect.

Hernandez-Zarate rushed in to help officer James Eichel after he was shot in the arm.

"She applied a tourniquet to officer Eichel and I’m scared to think of what might have happened if she didn’t do that," Keller said. "So I absolutely believe she saved his life."

Eichel was released from the hospital Thursday – he left the hospital in a wheelchair as a crowd cheered for him. 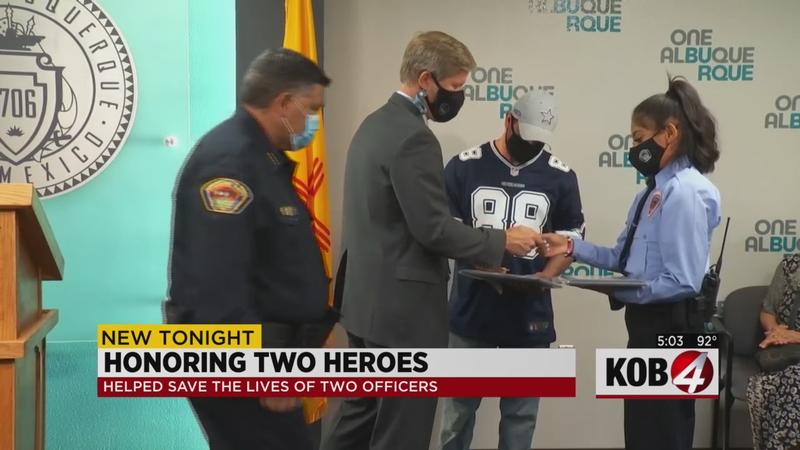 As for Johnny Garcia, he was in his backyard when he heard the gunshots ring out last Thursday.

"At that moment, it was kind of surreal, I couldn’t believe it," Garcia said. "It was going on right there."

He jumped over his back wall, where he found officer Mario Verbeck with a gunshot wound in his neck, above his bulletproof vest.

"I approached him real easy to show that I was OK, make sure he was OK," Garcia said. "I saw his eyes, they were looking at me so I knew he was responsive and he started talking so we kind of helped each other throughout picking him up and carrying him off."

As Garcia helped Verbeck to safety, he also used the police radio to call for help. Verbeck is still recovering in the hospital, and Garcia is looking forward to seeing him again soon.

"I’d just say, pull through, and I can’t wait to meet you and shake your hand, and thank him for everything he’s done for us as a community, too," Garcia said.