ALBUQUERQUE, N.M. — Following the tragic death of a seven-year-old boy hit by an ATV driver in December, the Albuquerque Police Department is stepping up enforcement targeting ATV drivers.

APD Deputy Commander Michael Meisinger says since the fatal crash, the community has been more aware of these drivers.

"There are instances when people are calling more," Meisinger said.

Just last month officers pulled over an ATV driver. Officers learned he had an active warrant for his arrest and was on the run for about a year.

"Traffic stops give us an excellent opportunity to encounter these individuals with active warrants and deliver them back to the courts," Meisinger said. 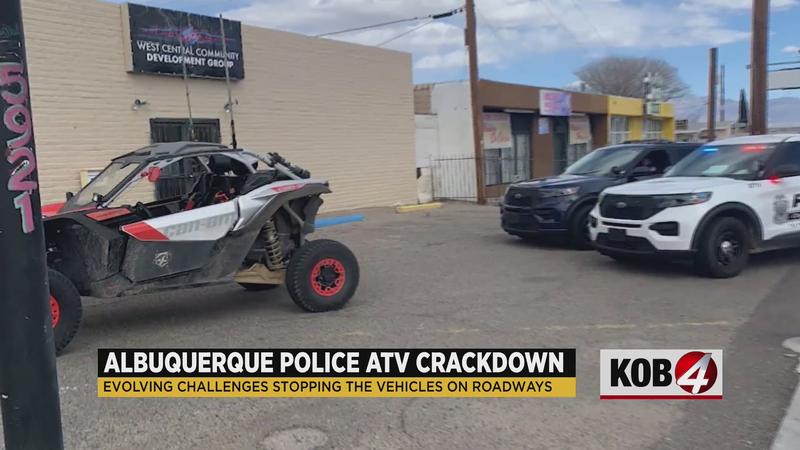 This past Sunday, officers were on the lookout for ATVs driving on city roads illegally. In just a few hours they pulled over nine ATVs and handed out six citations. However, Meisinger says there were about 20 ATVs.

"Of those, half of them fled, when they tried to stop the vehicle," Meisinger said.

Police have seen fewer instances of drivers in these off-road vehicles taking shorter trips from their homes. Meisinger says a lot of those drivers claim they didn’t know ATVs were not allowed on city roads. The problem now, according to Meisinger, is that they are seeing an uptick of people that are intentionally going out in groups and fleeing when police arrive.

"They’ll turn around, look at them, smirk, wave and fly off," Meisinger says. "They’ll just blow through a red light or stop sign and take off at a high rate of speed."

Similar to what we saw months ago when investigators say Sergio Almanza sped through a red light hitting and killing Pronoy Bhattacharya at the River of Lights. Police say Bhattacharya and his father were legally in the crosswalk when both were hit.

"It’s just really unfortunate given the recent events and that people are aware that bad things can happen when operating these ATVs on the street."