While that doesn’t sound like a lot, it was enough for Adrian Ortiz and his pup.

"As long as we’re able to have boats and everything else out here, it’s still good enough to come out and have fun with the family,” said Adrian Ortiz, an Albuquerque resident.

Despite the drought, nearby businesses said they’re not seeing a lull in traffic. 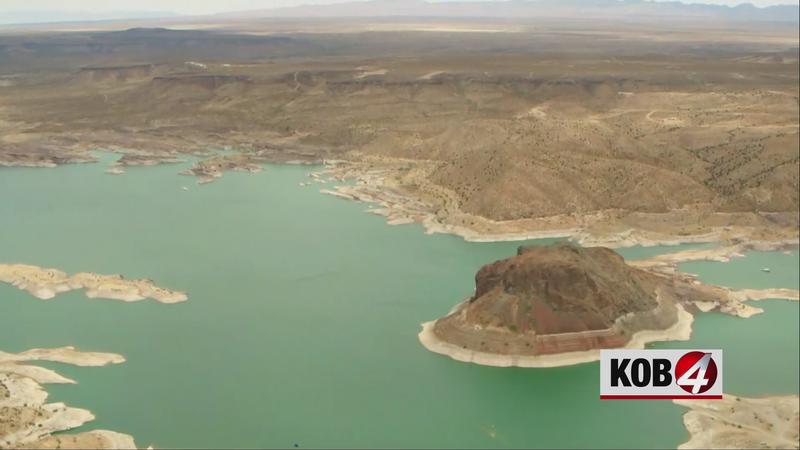 "We have 20 rental craft and people take them out to, you know, three hours or sometimes all day. We’ll probably do 40 to 50 rentals today,” said Neal Brown, president of Lago Rico.

Much of the water at Elephant Butte Lake is used for irrigation. If the monsoon season is a letdown, the water could reach the lowest percentage in years, according to Mary Carlson, public affairs specialist for the Bureau of Reclamation.

Carlson said 2019 had a good year with the runoff from snow and rain, but the drought is hurting the water levels. This year is the second consecutive year of extreme drought in a 20-year cycle, Carlson explained.

Other residents and some local lawmakers, however, aren’t putting the blame on the drought. Instead, they said the low percentage is because of poor water management.

"The state of New Mexico needs to manage these waters,” said Neal Brown. “If you run out of gas in your car, you don’t blame the gas station for it. You blame yourself because you didn’t manage your gas."

Republican State Rep. Rebecca Dow (District 38) has proposed some ideas on how to better manage the water.

"We are in a crisis in our state where we have ditches and canals and dams that are past their life and we are losing water,” she said. “We want to see as much of the water that’s released up north reach the butte. Very little of what’s released reaches the butte now because we do not have the proper infrastructure."

Carlson said the bureau has talked to businesses and local lawmakers about possibly adding another storage pool for recreational use only, but it wouldn’t be a quick fix. She said the next hurdle would be finding a place with enough water to lease.

Other reservoirs in the state are hurting, too.

"The water that we are managing is efficiently reaching Elephant Butte. This is definitely a drought issue. There’s really no way to deny that,” said Carlson.