ALBUQUERQUE, N.M. – Keeping guns secure at home and out of the hands of children is the push behind a new project in the Duke City.

"We want to prevent a loaded firearm from falling into the hands of a child,” said Albuquerque Police Department Lt. Jennifer Garcia.

The National Shooting Sports Foundation is behind the Project ChildSafe Albuquerque. Representatives from the city, Albuquerque police and Albuquerque Public Schools all gathered at Civic Plaza to show their support.

"The National Shooting Sports Foundation started Project ChildSafe in 1999, with the goal of supporting safe firearm handling and responsible ownership, with a focus on safe storage when guns are not being used,” said Joe Bartozzi, President & CEO of NSSF.

So far, the program has given out more than 40 million free firearm safety kits, each including a free cable gun lock. An APD officer showed people how to use one.

"So on a semi auto-handgun, you remove the magazine, which is the ammo. Place that away. You take the slide, you run it like three times to make sure it’s empty. You visibly and physically inspect it to make sure there’s nothing in the chamber. You get your gun lock out, run it up through your mag, through the mag well and lock it and secure it. Let the slide go forward on it, and the gun is secure, and there’s no way that you can load this gun or put a mag in it, make this gun fire."

The officer said gun owners can store the guns separately from ammo, “so the two are never together."

The NSSF said proper storage of a gun is essential to reducing gun-related accidents, misuse, thefts, and suicides, especially among children and teens.

"Safe environments can help reduce the risk of a suicide or mental health crisis situation. It only takes a few minutes to reduce the risk in your own home," said Vicky Price with APS.

APD said hiding a firearm is not considered safe storage. So in addition to free gun locks, Project ChildSafe provides information on other security options to accommodate a wide variety of lifestyles and budgets.

"Whether that be a lockbox, biometric safe, full-size safe, or other option,” said Garcia.

This program is available to anyone, for more information on gun safety visit projectchildsafe.org. 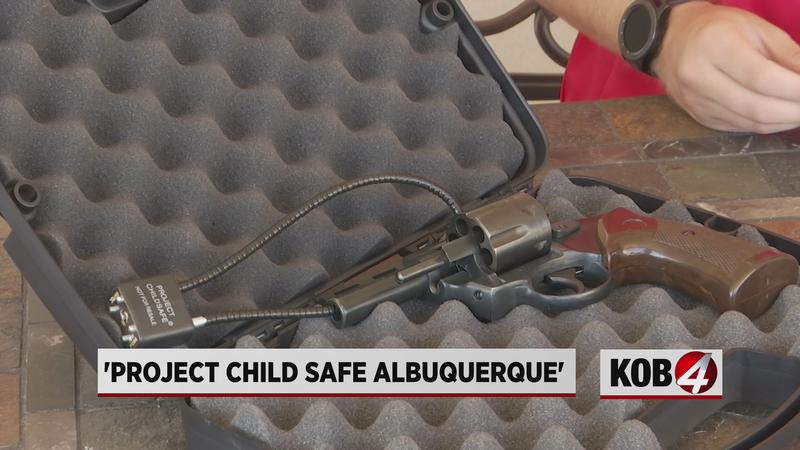