ALBUQUERQUE, N.M. – Many Albuquerque business owners say the break-ins and burglaries have got to stop. They’ve already had to deal with COVID and now they’re asking for help from state lawmakers to bring an end to all this retail crime.

In some cases, thieves are getting away with a lot. Authorities say Feliz Sanchez is responsible for more than 60 shoplifting thefts at several Albuquerque Targets – stealing nearly $40,000 worth of items from hard drives to baby monitors – in a six-month time frame.

Sanchez is currently facing several fourth-degree felony charges, which is a minimum of 18 months in prison. But a new bill just introduced this legislative session would bring the hammer down a lot harder on people who go on crime sprees like these.

Now, several businesses are speaking up saying change needs to happen. Otherwise, they don’t know just how long they can have their doors open.

This is a complaint Republican Rep. Bill Rehm of Albuquerque has been hearing a lot lately.

"The businesses are demanding that we do something to help them and we have to react,” said Rehm.

This is why he co-sponsored House Bill 29 that would change how shoplifters are charged, saying with the current law, people are gaming the system.

Under this bill, instead of people receiving multiple shoplifting charges for each occurrence, like they do now, the cost of everything they stole would be how charges are determined.

"So what we will do is add all of those up and charge them with the appropriate felony," said Rehm.

For example, if someone stole $200 worth of goods from ten separate stores, instead of being charged with ten misdemeanors they would be charged with one fourth-degree felony.

James Knight with Suits Unlimited and former chair of the New Mexico Retailers Association said this needs to happen.

"It’s critical right now. The problem is we are losing millions of dollars a year, a year here in Albuquerque due to that crime," said Knight.

His store has had multiple break-ins in the last two years.

"They have broken skylights and used a fishing pole to reel up suits and tuxedos through the roof," Knight said.

He was losing money from what was stolen or damaged.

"Broken glass. My gosh, the front doors are a thousand bucks or more."

He also lost money due to all the extra security measures he put in.

"Thousands of dollars just in security. Lighting outside, more cameras."

He believes this bill will make a difference to a problem that needs to be addressed.

Rehm said this bill does have bipartisan support. But he also says the only way for this to move forward is if Gov. Michelle Lujan Grisham allows it. As New Mexico heads into week two of the legislative session, they will have to move quickly if they want a chance to get it passed. 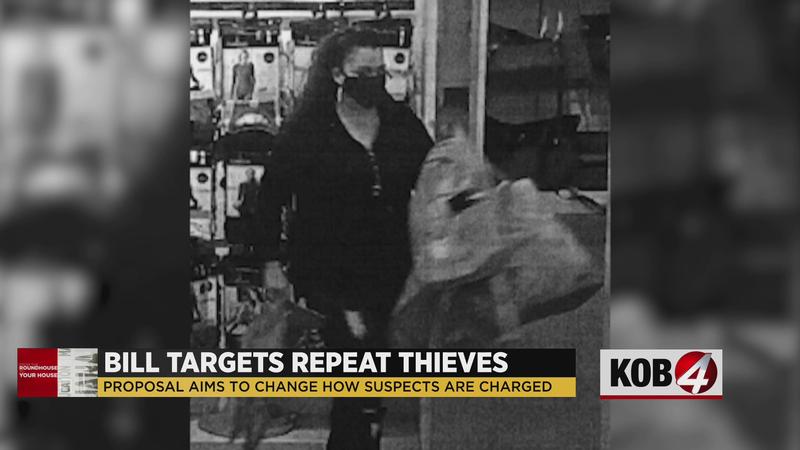