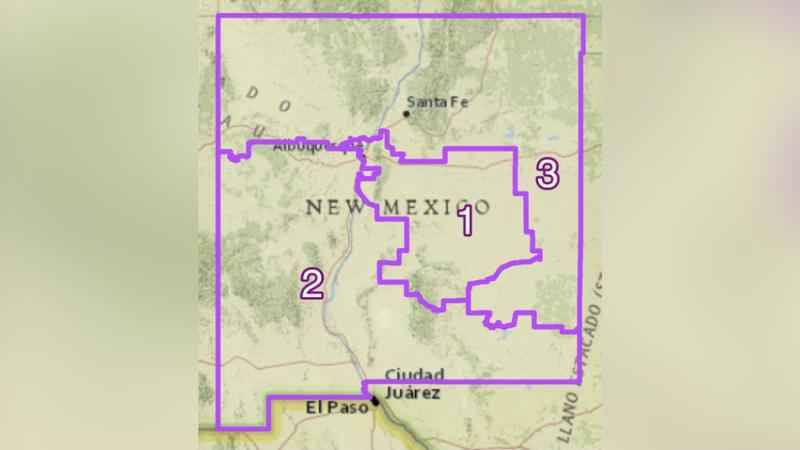 The proposed map would change the way thousands of people in New Mexico are represented in Congress. It is very different from what the state has now, and it would kick in for next year’s elections.

Portions of Albuquerque’s West Side and the South Valley will be moving to District 2 – the southern congressional district currently represented by Rep. Yvette Herrell.

Everyone in Rio Rancho is also getting a new representative – moving down into District 1 with most of Albuquerque, currently represented by Democrat Melanie Stansbury.

There would also be changes in southeast New Mexico, which would be split between all three districts.

Ruidoso will be moving up to District 1. Hobbs is being split in half between Districts 2 and 3.

Roswell, and the northern part of Hobbs will also now be in District 3, currently represented by Democrat Teresa Leger Fernandez.

UNM Political Science Professor Dr. Lonna Atkeson said earlier in the session that this could lead to Democrats winning all three districts.

“Are we going to keep the same boundaries, which have led to, for example in our federal elections, a common two Democratic and one Republican house member split or are we going to change that map so that it really probably picks up three blue districts? That’s really what the fight is over," said Atkeson.

Republicans are not happy with the map. They feel this unfairly divides certain areas, including in southeast New Mexico – a traditionally conservative region.

Democrats say the new map will give each district a similar mix of urban and rural voters, increasing unity by having each representative represent interests across the whole state.

They also point to the fact that this map is close to one of the maps put forth by a non-partisan committee that took public input.