ALBUQUERQUE, N.M.- A judge is considering whether Elexus Groves and Paul Garcia should be charged with depraved-mind murder.

Groves and Garcia are accused of killing a woman and her 14-year-old daughter while fleeing from law enforcement in a stolen van. The two have been in jail since 2017.

In a hearing via Zoom Thursday, lawyers argued and the judge listened to witnesses to see if there was enough evidence to charge Groves and Garcia with depraved-mind murder.

"It’s a probable cause determination, so it doesn’t need to be particularly verbose," said Judge Brett Loveless. "So I guess what I’ telling you is keep it to the bare bones because we need to get it done in the time allotted."

Dr. Ross Zumwalt was the first witnessed called to testify. He works for the Office of the Medical Investigator, and performed the autopsy on 14-year-old Shaylee Boling. 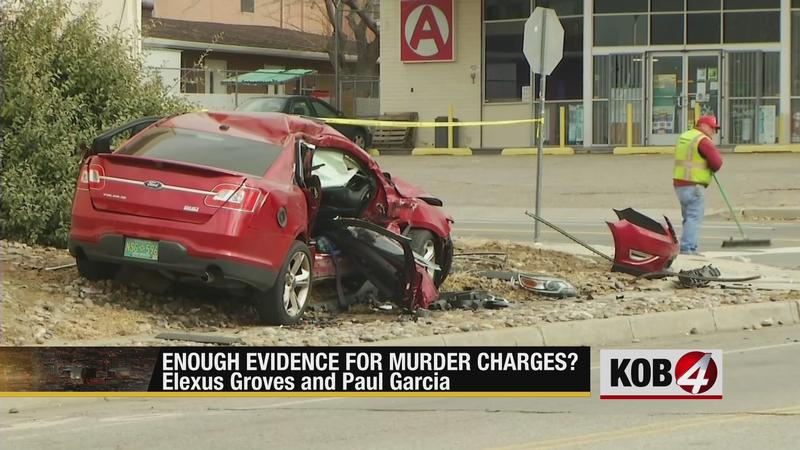 "The head injury was a fatal injury. It would’ve caused immediately unconsciousness," he said. "It explains the death of itself. The immediate injuries with the chest and rib fractures, and the liver tears could’ve caused death in and of themselves too."

Shaylee was the passenger. Her mother, Shaunna Arredando-Boling, was taken to the hospital but died two weeks later.

Prosecutors argued Arredando-Boling died because of her injuries.

The defense argued over a technicality, claiming information about Arredondo-Boling hadn’t been turned over.

The defense claimed the evidence showed the van was, at one point, going 80 miles-an-hour in a 70 mile-per-hour zone, and ultimately was not a depraved mind act.

There was some debate over accuracy.

Then the hearing ended with testimony from the APD sergeant on duty at the time of the crash.

He says once officers confirmed the van was stolen, they tried to pull it over.

"He did start to pick up speed, started changing lanes without, you know, using his signals or anything like that," the sergeant said.

APD said the chase was eventually called off.

Testimony from the officer is expected to continue Friday morning.