ALBUQUERQUE, N.M. – Taking care of our most vulnerable population is a mission at All Faiths Children Advocacy Center but people there said the pandemic has been especially hard on our children – and the trauma is even more severe.

That center, which provides such a critical resource for families, needs more support and funding.

It is discrete for a reason, protecting the people and children who walk through these doors. All Faith’s is a children’s advocacy center and has the largest forensic interview program in the state.

"Rather than keep re-interrogating the child and re-traumatizing the child of the story, the idea is one the interview is recorded the child can go on with the healing process," said Krisztina Ford, CEO & President of All Faiths.

They get referrals from CYFD and law enforcement agencies, talking to children who’ve experienced severe trauma, neglect, even sexual abuse.

"As the numbers dropped here, the number of interviews dropped here, but the severity of the cases was unheard of. so what we’ve seen over the last 18-months was an all-time high in severity and in really tragic circumstances and tragic stories," said Ford.

She said in trauma research they use the term ACEs to describe adverse childhood experiences. That would be things like experiencing abuse, homelessness, an incarcerated parent or hunger before the age of 18.

The number of experiences increases the score. She said the nationwide average is 1.5. But the children coming to see them score a 5 or 6, making their services more important than ever.

"Research shows us that if we are not addressing these issues early on, as they happen, they will later show up as substance abuse or people not being able to finish school, hold down a job or maybe become homeless and have mental health issues," said Ford.

But like many other businesses and organizations, their resources are stretched thin. Often surpassing the money they have coming in. This year, according to a recent presentation to city and county leaders, they’ve over-expended by hundreds of thousands of dollars.

"We are not a nice to have, but a need to have the program. A lot gets changed here. While it’s very sad to hear the stories of the children that come to us this is also the door that opens to them for change, for normalcy and for healing," said Ford. "So it’s very important at we are adequately funded."

All Faiths is always looking for donors to help keep those programs running. Most recently their interview camera went down; however, officials said the city of Albuquerque wrote a check last week to pay for the replacement. 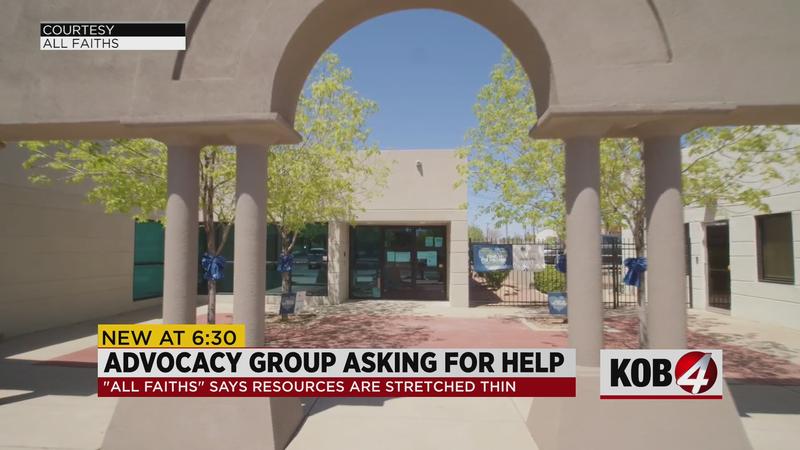 The next goal is to become a recurring part of the city budget.