Rail Runner ‘back on track’ after multiple people stabbed

ALBUQUERQUE, N.M. – After three people were stabbed on the Rail Runner Saturday, the commuter train is back on track again Sunday – showing everyone that Saturday’s attack hasn’t detoured riders from getting on the train.

Ren heard multiple passengers and a security guard were stabbed on the train the day before, but he says he still has to get where he is going.

“The biggest concern that I got is going back where the incident happened, other than that there really is no fear going up and down,” said Ren.

The train, where passengers were stabbed, was held at the Montaño station for nearly 8 hours before the Rail Runner finished its run to Santa Fe.

“There may need to be alterations in that service timewise depending on how long the investigation takes, we are hoping it’s not too disruptive,” said Augusta Meyers Rail Runner spokesperson.

The disruptions only lasted a day — Saturday’s schedule was altered– but on Sunday the Rail Runner went back to its normal schedule – hoping passengers would come back.

“This is particularly unfortunate given the fact that we saw a 50% increase in our ridership in the last week and a half because of exploding gas prices and warm weather and coming out of COVID,” said Meyers.

On an average weekday, the Rail Runner serves about 800 passengers but last week their daily average went up to 1,200.

Even with the stabbing on Saturday, Rail Runner officials say Sunday was a busier than average day and they are thankful for their loyal customers.

“We are grateful we have security on the train and we have passengers that banded together and did the right thing.” 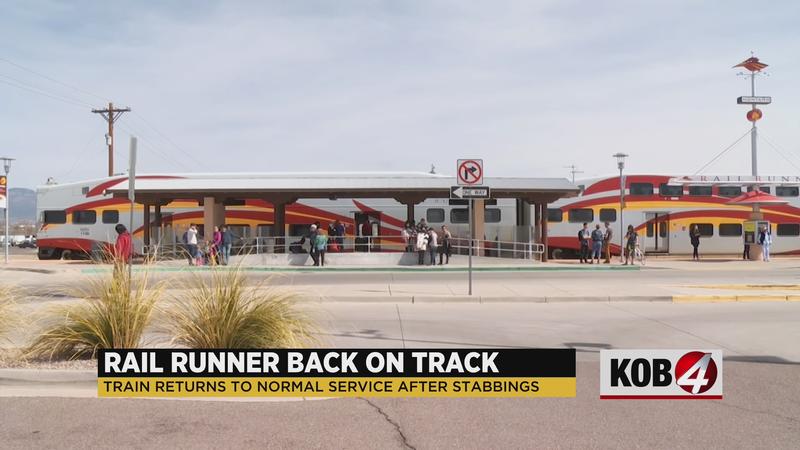