ALAMOGORDO, N.M. — As thousands across the world remember the lives lost on 9/11, a New Mexico family is remembering Al Marchand, who was on one of the planes that crashed into the World Trade Center.

“Even after all this time, the thing is I still can hear his voice, I can still picture his smile,” said Josh Marchand, son to Al Marchand.

Those who loved Al Marchand said he was adventurous, funny and always respectful.

“My dad was kind of a wild man, he was a clown as well,” said Josh.

“He had me pulling in water skiing, probably four or five-years-old, where I could barely even sit on top or see over the deck of the boat,” Josh said.

During the week, he’d spend time at the Alamogordo Department of Public Safety.

“Back then they had the fire trucks in the stalls there in the base and I’d sleep on top of the fire trucks and run around the fire station,” said Josh. “Once I got a little older, I would do lots of ride alongs with my dad and that was a lot of fun.”

“He was my training officer, when I first started. So, back in 1985,” said Livingston.

Livingston said Marchand became much more than a supervisor to him, the two were the best of friends, he was family.

“My kids loved him, he was there when my daughter was born, if you could talk to him today. You’d love him from the moment you met him, he was just that type of person.”

In March 2001 after more than two decades of service, Lieutenant Al Marchand retired as a watch commander.

“He wanted to travel the world a bit, he was on the internet one day and a United Airlines, um like a little pop up, showed up on his computer he was telling me about it. And he ended up signing like a four-year contract,” said Josh.

But Marchand would never complete that contract because just months after retirement on 9/11, he was on flight 175 from Boston to Los Angeles, which was hijacked by terrorists before it crashed into the World Trade Center. Marchand was 44.

Josh had plans to travel to Australia with his dad, and Livingston was planning to fly back east that day too.

“I thought wow, the first plane, this isn’t good on a day that I’m flying out, and then I saw the second plane and I knew, I knew something was wrong,” said Livingston. “I just got a real bad feeling that my, my buddy, was on that plane.”

Livingston put on his uniform.

“It was havoc, here all of our phone lines had shut down 911 was crashing,” said Livingston,

“I felt in my mind that I had to be strong for, for my family, so it took me a bit for all that stuff to process, because I felt like I needed to be the, the shoulder for them to cry on,” Josh said. “I was 19 when I lost him, so I was still learning a lot about life. So, after that it was it got pretty rough for me.”

Now 20 years later, Josh said he had to deal with it every year and spent time working in law enforcement, serving his community, just like his dad.

“He always taught me just to kind of move forward and keep when life throws stones, he just got to keep moving.”

Now he’s a tattoo artist living in Arizona and a proud father of five.

“He would just be so in love with them and what’s neat is I see, I see a lot of his personality in them sometimes, just the way they joke around their goofiness and stuff it reminds me a lot of my dad,” said Josh.

Livingston also carries memories of Al Marchand with him like this tattoo on his arm drawn by Josh.

“I have his dad with me every day,” said Livingston.

“I always made a pact if anything happened to us in the line of duty, that we take care of each other’s families,” said Josh.

This year, marks 20 years since 9/11 and the City of Alamogordo proclaimed today Al Marchand Day.

“The citizens here, of Otero County and Alamogordo. They will never forget him,” said Livingston.

“My dad was my best friend, up until I lost him, it would have been nice to travel with him too just to see the world a little bit with him, but I’m glad that he got to do that,” Josh said.

Josh said a flight attendant who worked with his dad recently reached out to him and will be sharing stories and photos of Al Marchand, something he said he’s really looking forward to. 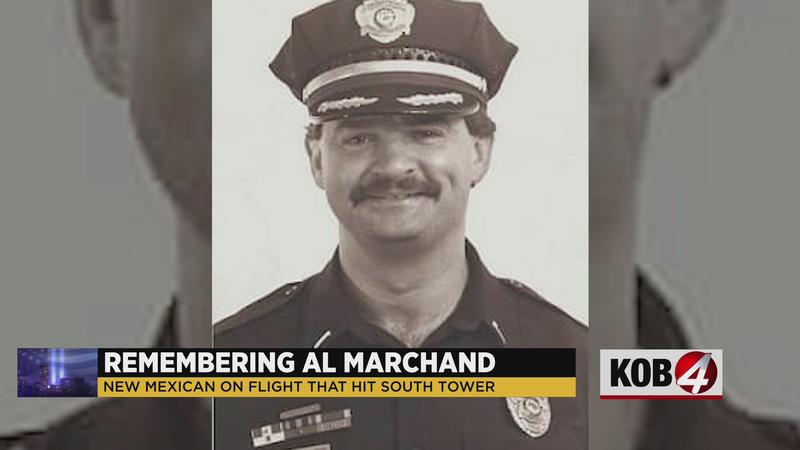