ALBUQUERQUE, N.M. – It is not your average hot air balloon. Pilots from around the world will head to the Albuquerque International Balloon Fiesta this year with a new device in their hands: a remote control.

The RC Balloon event is new to the fiesta this year. It will be something exciting for even the youngest attendees – these pilots never have to leave the ground.

"I think it’s cool. I really do," said Tom McConnell, a pilot on the International Balloon Fiesta Board of Directors. "I didn’t know anything about it. Had never flown one before two weeks ago."

This year, they jumped at the opportunity to get a scale-model balloon and exact replica of the Zia balloon they will be flying at the Balloon Fiesta.

"It’s a great way to learn all about ballooning," said Matt Guthrie, president of the International Balloon Fiesta Board of Directors. "The wind is going to react on this balloon just like it would on a big balloon. So it’s a great way to kids involved, then they grow up and graduate to a full-size balloon."

The scale model balloons are still pretty big, around 12 to 18 feet, but that’s nothing compared to the real deal. A standard balloon can range from 100 to 120 feet tall.

"Find someone that’s flying one and start asking questions," said Guthrie. “That’s what we did, we even got a quick flying lesson.”

Dick Rice, treasurer for the International Balloon Fiesta Board of Directors, has been in the game for a while. Though the system is different, he said you still need a crew to make sure it doesn’t take off.

These balloons are the perfect introduction – and who is better to lead that introduction than the RC Balloon Maestro himself, Matt McKay.

"I always wanted one but they were pretty pricey, so I could never really afford one," said McKay. "So, in 2015 I decided to try to build one myself, bought a cheap Craigslist sewing machine, starting practicing and went from there."

Now, he’s connecting enthusiasts from all around the world.

"Eventually, our goal is to set a world record during an event. Which is getting 55 or more RC balloons, which Germany holds the record right now for that," he said.

McKay said there will be around 30 RC balloons on the field this year. 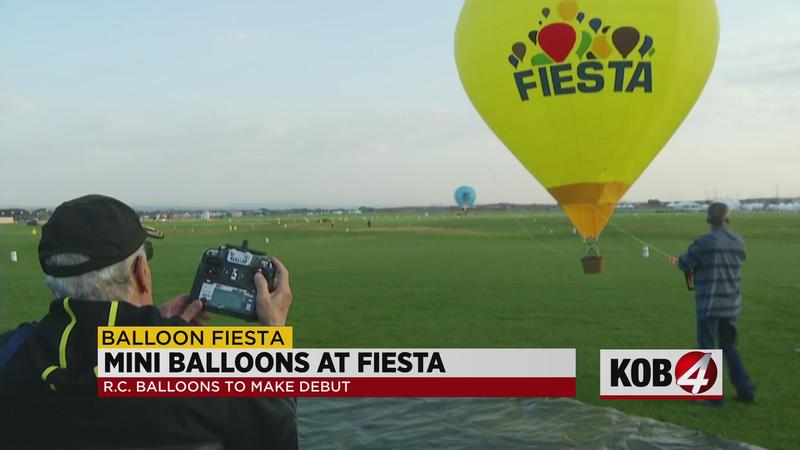