Republican Jay Block wants to be New Mexico’s next governor

He arrived in the state after a career in the Air Force, where he worked with nuclear weapons.

Kirtland Air Force Base was his last assignment, and Rio Rancho would become his new home.

"I chose to be here, I fell in love with New Mexico," the Republican said.

Block has served as a Sandoval County commissioner since 2017. 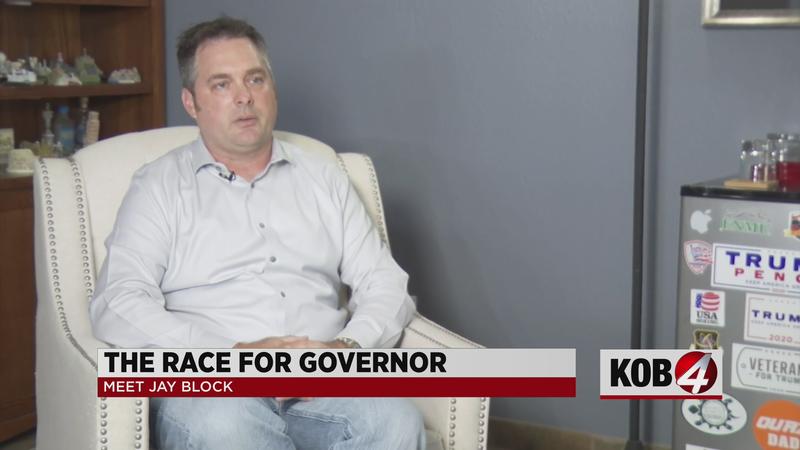 "I passed an ethics ordinance for the first time in county history, I was able to get Sandoval County as a 2nd Amendment sanctuary county," Block said. "I was able to help law enforcement and first responders with increase pay and better equipment."

Block says if elected, one of his first orders of business will be to help the businesses that were hurt by New Mexico’s pandemic restrictions.

"I will waive all the penalties and fees that this state government and governor has levied on churches, business and people," he said. "If you paid them already, you will be reimbursed."

Block has publicly aligned himself with former President Donald Trump. Trump bumper stickers are displayed in his home.

With Trump losing New Mexico by more than 11 points in 2020, KOB 4 asked Block if publicly aligning with Trump is a wise strategy.

"I think when you align yourself with those policies of record unemployment and a secure border, those are policies that Democrats and Republicans and Independents can come together," Block stated. "We all want jobs, we want to feel safe, we want to support our law enforcement."

To earn the Republican nomination and run against Gov. Michelle Lujan Grisham, Block must first win his primary.

The other Republicans who have announced a run include state Rep. Rebecca Dow, former National Guard Gen. Greg Zanetti, Karen Bedonie, who lives in Farmington, and retired educator Tim Walsh.