Now, some say a work search requirement for people on unemployment isn’t helping.

George Griego, who owns Central Grill, says he’s thankful for his employees who’ve stuck with him.

"Our faithful employees, the ones that are working, there doesn’t seem any kind of recognition for them. I’ve always said there should be some kind of government payout, something for them that have stuck through this whole thing," he said.

At the pre-COVID peak, Griego said he had 18 employees. He’s now down to eight. He’s hiring but says no one’s taking the jobs. 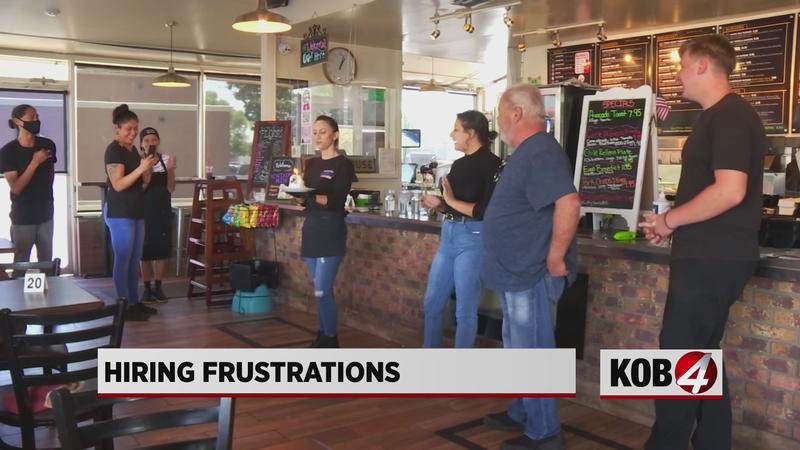 He says that’s put a strain on his eight employees.

"The unemployment incentive to stay home and not even look for work is probably just way too great,” said Griego. “I’m telling anyone that wants to listen. For the longest time I’ve said that they should do a 10 percent cut back every month. They have to make these people realize in that this unemployment’s going to go away, and they need to start looking for work."

In the meantime, the New Mexico Department of Workforce Solutions has re-started its work search requirement.

Anyone on unemployment must show two work search contacts a week.

But Greigo says it’s not helping to fill his vacant positions.

“We’ll put applications out trying to get people to come in and meet with us. We’ll get a rash of people that call, and they basically just want to put something down, so they can say that they looked for two jobs on the unemployment section," he said.

The New Mexico Restaurant Association says it’s hearing the same thing from other members, and it’s still extremely difficult to get anyone to work.