ALBUQUERQUE, N.M. — Brian Cillessen knew he wanted to be a part of military from the time he was three years old. He joined the Marines in 1992, and by 2004, he was heading to Afghanistan, to help fight what would become America’s longest war.

"I got to do something greater than myself and be involved in something I could be proud of," said Cillessen. "That’s a lifelong dream."

He spent seven months in the Hindu Kush mountains, forming bonds with villages and Afghans along the countryside.

"On a human to human level I would break bread with them, we would eat with them, I would stay in the villages for sometimes ten days at a time," said Cillessen.

He received a Silver Star, the third-highest military decoration for valor in combat, for actions he took on January 23, 2005. 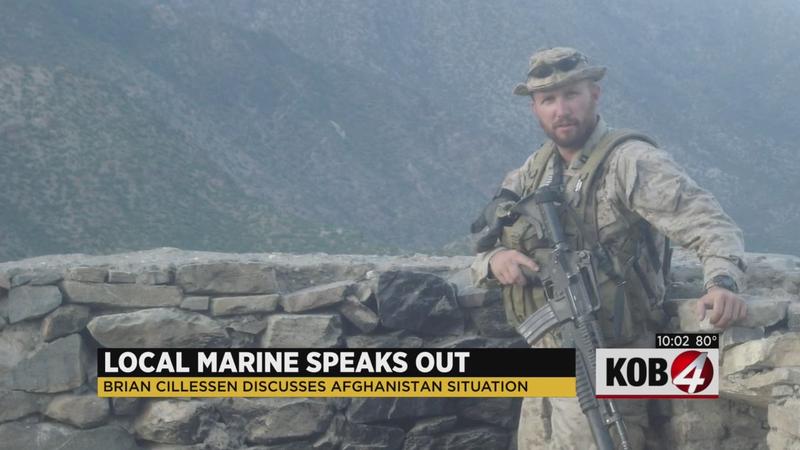 His team, side by side with the Afghan National Army Commandos, got ambushed during a mission.

"About the time I thought we were winning, they opened up fire from behind us," said Cillessen. "And it was one of the scariest moments of my life."

His platoon sergeant, as well as a couple other Marines, lost their lives during that fight.

Cillessen hung up his boots in 2014, but has always remained an engaged and concerned civilian.

He has seen coverage of the chaos unfolding in Afghanistan, and remains stumped on why U.S. leaders handled the exit the way they did.

"The first thought I was embarrassed," he said. "Because in the middle of the night, in darkness, we just kind of lurched out of there."

He looks back on the bonds he formed with the Afghan people, and the relationships that took more than twenty years to build.

"That void exploded as soon as we left because we’re the infrastructure, we’re the confidence, we’re the logistics, and we helped them to maneuver," said Cillessen. "Did we have to stay in Afghanistan forever? I don’t know. That question is the million dollar question really."

He believes current and past service members have something to be proud of, but he hopes that they all hold leaders accountable for this action.

"Watching this entire operation break down does make us feel like it’s all for not. There’s no question about it. But I’m fighting that feeling because if we don’t have something to believe in, then we won’t fight for anything."