LAS VEGAS, N.M. — New Mexicans honored the life and service of fallen Las Vegas firefighter Frank Lovato at the Our Lady of Sorrows Church in Las Vegas Friday evening. He was killed in the recent I-25 chase that also killed a police officer.

Lovato was a husband, father, and grandfather that was loved by the community of Las Vegas. He was with the fire department for more than 20 years – retiring back in 2006. Those who worked with him said he was the definition of a public servant and, even after retiring, still helped the town when needed.

“Firefighters across the country are all brothers in arms in Las Vegas they are our neighbors from Santa Fe so we want to always be there for them," said Santa Fe Fire Department Assistant Chief Sten Johnson.

Many tears and hugs were shared Friday night, for a man who everyone says was the definition of a public servant.

"He was a true leader, he would go with the guys and do stuff and not say, ‘go do this.’ I can’t think of a better definition of a firefighter, and I’m honored to wear the same badge that he wore," said Las Vegas Department Interim Chief Steven Speann.

"You know, Frank is always been a key person in the community since he was a first responder for a long time so we had a lot of respect for him," said Albert Gallegos.

Last week, Lovato was near Santa Fe, running errands, when he got into the horrific crash caused by someone who led police on a high-speed chase.

"And then later finding out that lady really hadn’t been kidnapped. She had fabricated everything. That is horrible," said Gallegos.

While they remember Lovato, a beloved firefighter for more than 20 years in Las Vegas, they also hope for justice.

"Personally, I hope that she gets what she has coming to her. Justice for Frank and the police officer that was killed because there was no need for that," Gallegos said. 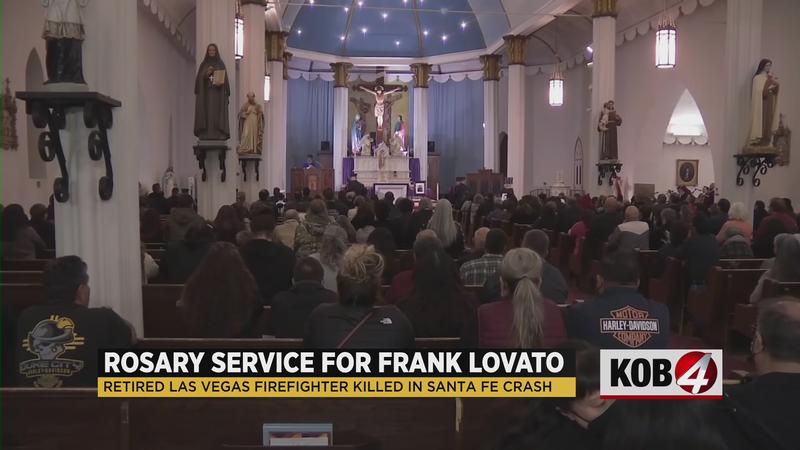 His public funeral mass will be Saturday at 9 a.m. at the same church.