ALBUQUERQUE, N.M. — One New Mexican man spent 550 days in the hospital after being diagnosed with COVID-19. After being away from his family for more than a year, Donnell Hunter was finally able to go home.

It seemed the whole town of Roswell rolled out the red carpet for his return, he even got a police escort as he was driven in from Albuquerque.

Signs of encouragement lined the road into Roswell Friday. All greeting Hunter as he came home, after more than a year in a hospital bed.

Over zoom on Saturday, KOB 4 asked, “How does it feel to be home?”

Hunter was speechless. “Ohh man, it’s a– well. I can’t even put it into words.”

550 days ago, back in September 2020, Hunter was checked into the hospital. Because of his condition he was heavily sedated and on a ventilator for most of the first year.

“I lost usage of my hands of my arms of everything my legs so I had to wait for all that to come back and do a lot of rehab speech therapy learn how to eat learn how to swallow I had to learn everything all over again,” Hunter explained.

“I tell him it’s like having a newborn because like his first steps were just a milestone,” Ashley said

But she had a lot of work to do to, making sure their home was ready for his return.

“I wanted him to come home and feel like home I didn’t want to feel like we were in the hospital so I tried to make things look as least hospital looking as possible,” Ashley said.

For Hunter, just being home is a dream come true.

“I was like ‘Thank God!’ when I woke up, I wasn’t dreaming, it was real!” Hunter said with a smile across his face. “Because when I was in the hospital I had many dreams that I was home and I’d wake up, and like I said, ‘it was all a dream.’”

But this homecoming is a reality. And he’s catching up on all he missed out on

“I met my grandson for the first time it was amazing,” Huner said, “He’s a year now and he acts like he had been knowing me all his life so as soon as I woke up this morning he was the first thing on my mind.”

While everyone is excited to have him back, they still have a long road ahead of them.

“If it takes a year to get back to normal, we will be here every step of the way if it takes five years or even if he never gets the same we are happy,”

But together they are going to take it one day at a time.

“The Lord knows what he has in store for me, I don’t, he brought me this far and I’m just going to trust in the lord whatever he brings my way that’s what I will deal with,” Hunter said as he looks over as his wife, Ashley, who is holding his hand. 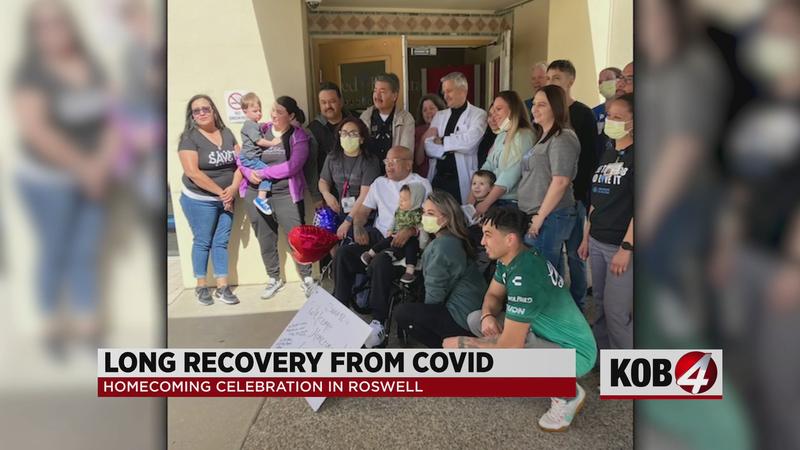