ROSWELL N.M. — With sales of recreational cannabis taking off across New Mexico, the City of Roswell is considering a proposal that would keep establishments from having on-site cannabis consumption areas.

The council at a special meeting on Monday voted 9-1 to put in a notice for a May 12 public hearing an amendment that would strip language related to cannabis consumption areas, out of the city’s existing cannabis ordinances.

If adopted by the council after the hearing, the amendment, would leave establishments, such as lounges and stores, without a process to obtain the permit and zoning documents needed to allow smoking or vaping of cannabis, or the eating of cannabis edibles on the site of a business property within the city limits.

City Councilor Jason Perry, who proposed the amendment, which will be among many other proposed changes to the cannabis ordinances discussed at the hearing, said the amendment is meant to address concerns about public safety issues, while also allowing businesses to make sales and consumers to ingest cannabis products. 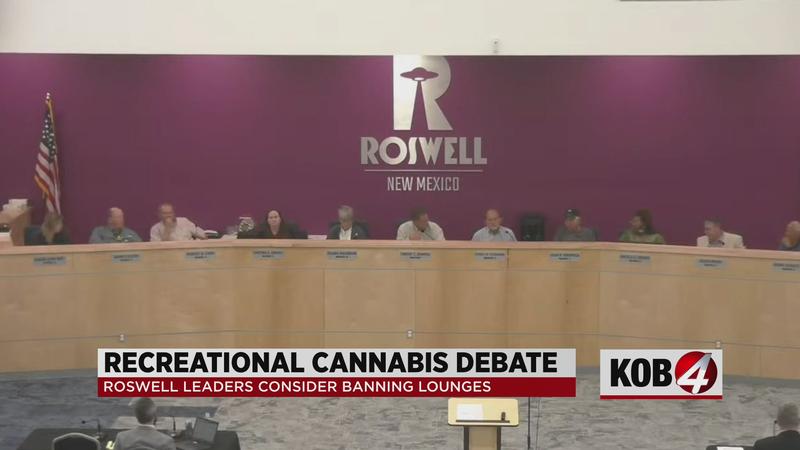 Under the Cannabis Regulation Act that was passed by the Legislature and signed into law by Gov. Michelle Lujan Grisham last year, communities and counties cannot completely prohibit the operation of recreational cannabis businesses within their jurisdictions.

However, state law does authorize local governments to enact regulations on the time, manner and hours under which such a business can operate.

Parker Patterson, the city’s attorney, said at Monday’s meeting that while the law is new and he has not seen any case law on it, he believes the state law does give localities the ability to prevent on-site consumptions.

He points to a section in the Cannabis Regulation Act which states that a local jurisdiction may “allow for the smoking, vaporizing and ingesting of cannabis products within an indoor or outdoor cannabis consumption area.”

“As I read it, if it says a local jurisdiction may allow for something, the inverse of that must also be true, that they can prohibit it,” Patterson said.

But when questioned by Oropesa, the lone vote against placing the amendment on the notice for the hearing, Kevin Maevers, the city’s community development director, said he the question on whether the city could prohibit on-site consumption, is not clear.

Other amendments to be discussed will include hours of operation for cannabis businesses within the city boundaries, including a proposal that would ban local Sunday cannabis sales.

According to the public notice, the meeting is scheduled for May 12 at 6 p.m. at the Roswell Convention Center and will take place during the council’s regular meeting.