RUIDOSO, N.M.- Although the flames may be extinguished, the scorched trees and damaged property from April’s McBride Fire have not gone away.

Mayor of Ruidoso, Lynn Crawford, said the fire and its aftermath have been an emotional rollercoaster for his constituents.

“It’s certainly gone from fear and not knowing what’s going to happen to the point of now that we’ve seen what the devastation was and now what do we have to do for the recovery now for the folks that have been impacted most,” said Crawford.

On Thursday, the state responded by holding a, “Cabinet in your Community” event at the Ruidoso Convention Center, so those affected most by the fires, could speak with the heads of different state agencies and learn about the relief and services available to them.

The most pressing issue is to find housing for those who have lost their homes to the McBride Fire, in which 207 houses were destroyed. Crawford said 50 families are still in need of long-term housing, He noted that some owners of short-term housing units, have converted them into longer term housing, where individuals can stay for up to a year.

However, Crawford said, more long-term solutions have to be found, such as increasing affordable housing stock and helping people rebuild their homes. Something made harder by high inflation, workforce shortages and soaring home prices.

Many of those who have lost their homes are those who can least afford to do so, such as those who do not have insurance.

“The homes were are talking about are people who work, they’re families, they’re neighbors, their kids who go to school here,” Crawford said.

Additionally, the village’s often booming tourism economy took a hit from the fire.

“We had a lot of cancelations on our hotels, our short-term rentals. A lot of bookings with our off-road vehicles things like that. All have gone down. So we’re now in the process of letting everyone know that we are open for business,” Crawford said.

Despite the challenges though, Crawford said the village has also been the recipient of much generosity, in the form of donated food, water, and hygiene products and cash assistance for those who have lost their homes.

“We’ve received over $200,000 that we’ve had the Lincoln County Community Foundation that is writing those checks directly and putting them in the hands of those people that are affected,” he said.

On Wednesday, U.S. President Joe Biden an emergency declaration for New Mexico due to the abundance of wildfires. Crawford said he hopes that will provide the village with additional resources for the recovery. 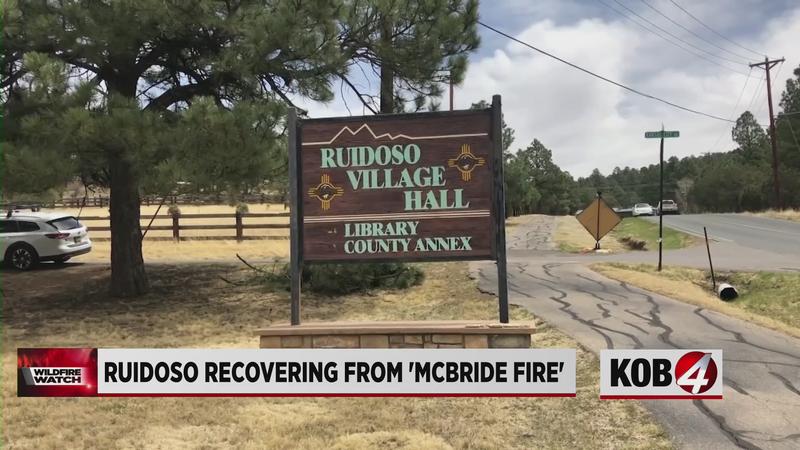