ALBUQUERQUE, N.M. — An Albuquerque city councilor is trying to do more to help victims of domestic violence.

"I can tell you as a former police officer, I never went to a domestic violence call where there wasn’t something else happening in that relationship, and in that world,” said Albuquerque City Councilman Pat Davis.

The Albuquerque Public Safety Committee passed a resolution that would create a “safe harbor” for domestic violence victims. That means even if a victim has criminal warrants, they won’t be arrested for calling police if any “reasonable alternatives to arrest are available”.

"There is child endangerment issues, there’s substance abuse issues, there’s all kinds of economic problems that are contributing to this. What we’re saying is—if you are a victim of violence, we want you to talk to us so we can help you with that. Everything else we’re going to work on tomorrow,” Davis said.

During the hearing in March, Chief Medina addressed what the city administration called “false rumors” alleging he used his position to help his son in a criminal investigation.

"My son’s abuser told police my son had a misdemeanor warrant for DWI at the time of the incident. We also learned from my son, his abuser often threatened to tell police about the warrant if my son ever reported their abusive relationship,” Medina said during his confirmation hearing.

Medina put any concerns to rest with the city council, and was unanimously confirmed as police chief.

"He took advantage of those resources and he was brave for doing so, but it is despicable that the system as a whole failed him,” Medina said.

"That really crystallized for all of us that somebody who had access to the chief of police, the person in-charge of APD, felt like they couldn’t come forward and ask for help,” Davis said.

Councilman Davis, who is sponsoring the resolution, hopes this tactic will lower crime rates.

"When we look at Albuquerque’s violent crime problem, when we look at our domestic violence issues, we’re seeing this explosion of cases, a lot of times involving people with substance abuse and old warrants and old cases. We want them to come forward and get out of those and let’s resolve these issues,” Davis said.

Davis said he believes a safe harbor may be the key to helping victims.

"If somebody related to the most powerful cop in New Mexico was afraid to ask for help, imagine what happens to everybody else?" Davis said.

According to statistics provided in the resolution, one-in-three women in New Mexico and one-in-seven men have been victims of domestic violence.

The measure will head to the city council in May. 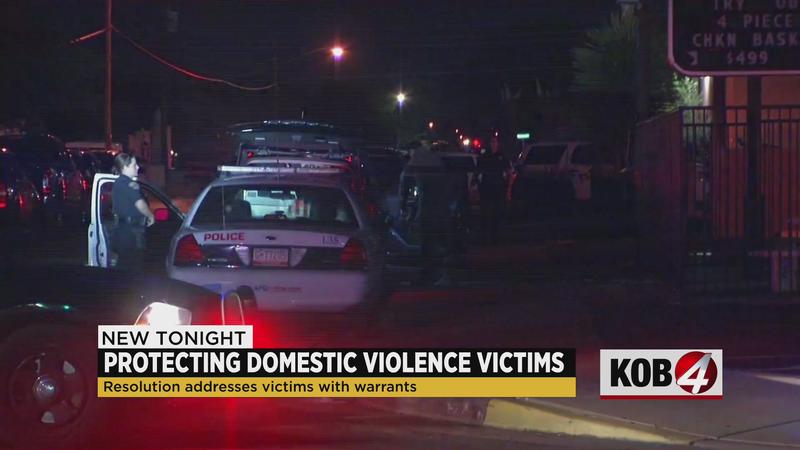