ALBUQUERQUE, N.M. – This Saturday, if you’re looking to shop local while giving back, you might want to check out a pop-up fundraiser at the Salt Yard East.

An all-ages, pop-up market will be taking place from 11 a.m. to 3 p.m., featuring over 35 vendors, live music, food, sweets and more to benefit the Albuquerque chapter of ‘For Goodness Cakes’.

"For Goodness Cakes is a nonprofit organization that was founded in 2016 in California," said Brittany Puckett, of For Goodness Cakes. "We get birthday cakes and graduation cakes to foster and homeless youth through volunteer bakers."

Since the Albuquerque chapter became active in 2019, they have delivered more than 300 cakes. In Albuquerque, there are around 130 volunteers, including Tania Parrillo who started baking three years ago and now has her own business – Tania’s Tasty Kitchen.

"It just was one of those things I found was my zen," Parillo said. "I would go in the kitchen and zone out and forget about everything during the day." 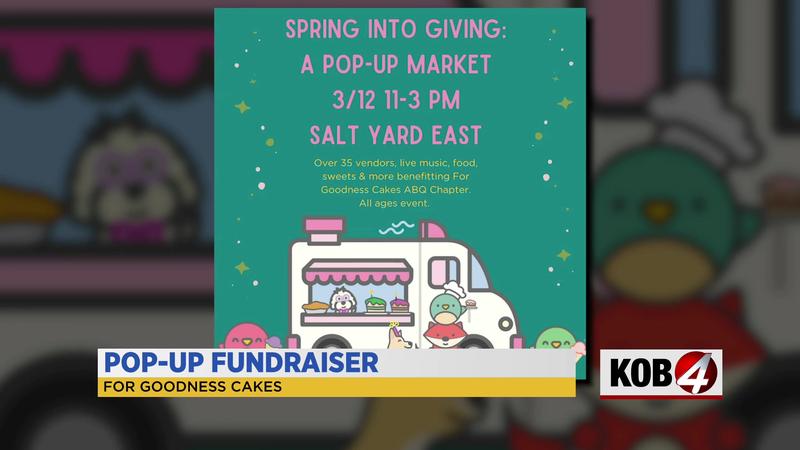 Parillo is one of the dozens of vendors who will be donating their proceeds to For Goodness Cakes.

"I believe everybody deserves cake on the birthday – kids especially," Parillo said. "I know kids out there are unable to get that because of whatever situation they’re in so if I can give back to my community in such a small way, I’d love to do that."

Like Parillo, the Salt Yard joined in on the donating as they donated their venue for the event and live music from the Stray Dawgz will be at the event.

For more details on For Goodness Cakes, visit their website.