SANTA FE, N.M. – Many packed the Santa Fe High School gym to honor a star student-athlete whose life tragically ended too soon. JB White was killed more than a year ago — at a house party.

On Saturday night, his jersey number was retired to keep his memory alive, and KOB 4 spoke on-camera with his grandmother for the first time.

"Just a way for us to keep his name, keep his memory alive,” said Zach Cole, White’s coach.

Throughout the gymnasium, from those in the stands to the players, “Long live JB” and his jersey number could be seen everywhere.

"He was just a loving guy, his laugh was contagious, he wanted to see his teammates do well it wasn’t just about him,” said Cole.

White was larger than life, literally.

"The size and the length and the speed and the athleticism."

His coach Zack Cole said he was one of the top players in the nation.

"Many coaches would tell me, ‘you know you have an NBA player right coach?’" said Cole.

His grandmother, Voss, took him to every single game and knew her grandson was special.

"I knew that JB was going to be huge because ever since I would take him to practice people would be telling me we are going to be reading about JB because he was always phenomenal."

But tragically, he never stepped foot on the court for the Lobos.

“He is playing in heaven now."

It was August 2020, when authorities say White attended a party and got into a fight with Estevan Montoya, who was 16 at the time. Investigators say Montoya pulled out a gun and shot White. He was rushed to the hospital but did not survive. A senseless death that hurt everyone in the community.

Which is why on Saturday night, the school retired his jersey number. to honor and remember him. his family walking out on the court to see his enshrined jersey.

“I’ve been overwhelmed with all the love. I’m very grateful for everything people have done for JB."

Voss – still reeling from White’s death– said while she is thankful for all of this, wishes they could be celebrating with White by their sides.

"I’m just broken because we should be celebrating something different and not his passing."

Voss said all she wants now is justice for her grandson. Montoya’s trial is set to start in May. 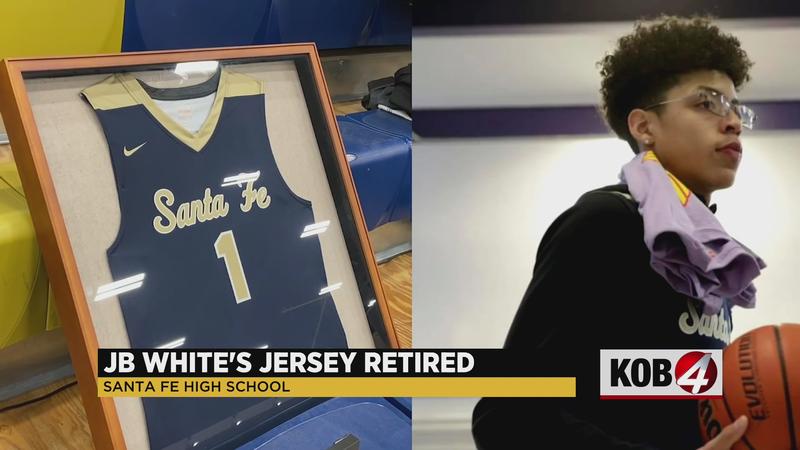