SANTA FE, N.M. — Police are searching for the person who spray-painted a swastika on a wall outside of a Jewish man’s apartment over the weekend.

Jeff Hornstein told police he noticed it Saturday night, just a couple of days before the Jewish holiday of Rosh Hashanah. The Santa Fe New Mexican reports that Hornstein filed reports with police and the Anti-Defamation league.

He commented on Monday, saying, “I came forward because I felt that I had to stand up to hate, ignorance, and cowardice."

"It’s not something I would really expect in Santa Fe,” said a neighbor who lives down the street. “And it’s a little too close for my comfort. It’s frightening."

The Santa Fe New Mexican also reports that police don’t have any suspects, and until they do, they can’t classify it as a hate crime. As of now, they’re calling it vandalism. 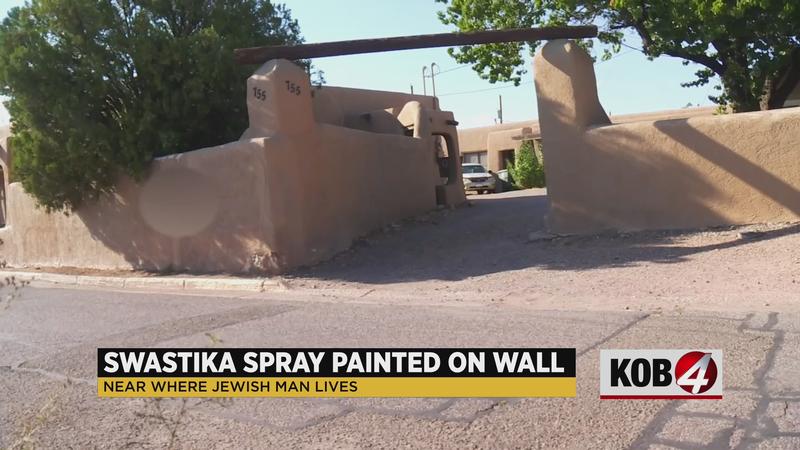 "I take it pretty seriously,” said the same neighbor. “This is not a joke, there’s nothing else written here, except for the swastika. It’s a big message."

Rabbi Berel Levertov from the Santa Fe Jewish Center less than two miles away from where it happened said it’s shocking, and in his 25 years of living in Santa Fe, he has never been targeted.

"It’s been a loving community, embracing community,” said Levertov. “This must be an exception to the rule, so I’m not really worried."

He said he plans to counter the hate with love, and said he will open his door to anyone who might’ve done this.

"We respond to hate with bringing more love, and more kindness. And more Jewish,” said Levertov. “We don’t believe in hiding our Jewishness. We live in a beautiful, amazing country where we can practice freely."