SANTA FE, N.M. – One man is in custody now after leading Santa Fe police on yet another wrong-way chase down I-25.

KOB 4 spoke to the police department Tuesday about how they handled this chase differently than the deadly wrong-way crash from earlier this month. The main difference is no Santa Fe police officer followed the suspect the wrong way on the interstate – and they had state police shut down I-25 so as few people would be on the road as possible.

The chase started at the TJ Maxx parking lot in Santa Fe, where witnesses called 911 saying a woman was being forced into a car. The car was spotted driving down Airport Road. When police approached the suspect, Nathanel Bueno Diaz, he took off down Cerrillos Road where he got onto the interstate and headed south towards Albuquerque.

“We were put in a situation where we have to weigh those risks, do we allow that person to leave with the female that was taken forcefully or try to apprehend them?” said Ben Valdez, the Santa Fe Police Department deputy chief.

In that moment, SFPD officers decided to follow Bueno Diaz onto I-25. After going up and down the interstate multiple times, Bueno Diaz took the San Filipe exit, then turned into oncoming traffic going the wrong way down I-25.

“Our officers were put in a very challenging situation, a lot of them were still processing the loss of our officer, so it’s a risk anytime they do out there but they have to weigh the risks,” Valdez said.

This time, they took a calculated risk and continued down I-25 with traffic but not far behind Bueno Diaz.

“When that individual went into oncoming traffic they had to make that decision, what do we do at this point, so they started coordinating to shut down the interstate to limit traffic that would be in that corridor," said Valdez.

State police shut down the northbound lanes so no one would run into Bueno Diaz and an NMSP officer was able to stop the suspect with a pit maneuver. Bueno Diaz was taken into custody.

“This is sad to see we are very familiar with Mr. Bueno Diaz and here he is again engaging in conduct that is unsafe for everybody.”

Bueno Diaz is being held in the Santa Fe County Adult Detention Center where he will face a long list of charges for kidnapping, battery of a household member, assault of an officer, assault with a deadly weapon and resisting and evading arrest. 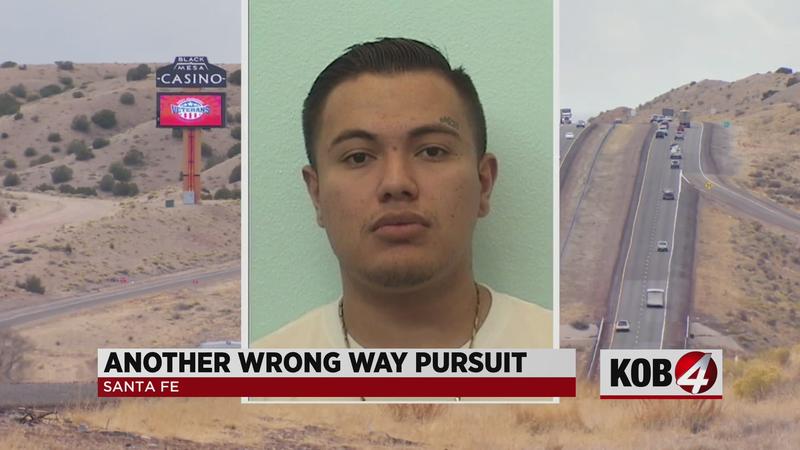