She said in a statement to KOB 4:

“On Friday, March 4, 2022, I attended an event at the Santa Fe fraternal order of police. During that event, I was approached by a male, Rudy Garcia, at which time he improperly and inappropriately placed his hands on my body.

This action by Mr. Garcia was not only inappropriate and unwelcomed but was very upsetting and traumatizing for me.

As a young 21-year-old woman, this type of encounter is very stressful.

Two days after the incident, on Monday, March 7, 2022, I made a decision to file a police report concerning this disturbing incident. It took me a few days to compose myself as well as come up with the strength and courage to report to authorities what had occurred to me on March 4.

I rightfully reported to the police what had happened to me because I want change. Rudy Garcia created an unsafe and distressing situation for me and he needs to be held accountable for his actions.

I am a person as well as a woman. This unfortunate incident has taught me not to be silent, as I deal with the fear and resulting trauma. No person in a position of power, no man, should take advantage of their entitlement and abuse it.

In the short time that this incident has become public my account of the incident seems silenced. It has been made into a political issue and I, as the victim, have been accused of making up this story. This is how women are treated when having to deal with these types of situations.

I have yet to hear back from the investigators, nor do I have a copy of the police report. I am of the understanding that this incident remains under investigation.

I am hopeful that justice will prevail and will await the outcome of the investigation.”

KOB 4 reached out to county commissioner Rudy Garcia for comment. While he didn’t get back, he did send a statement to the Santa Fe New Mexican:

Adan Mendoza asked to be referred to by his first name, rather than his title, since he is acting as a father in this situation and not the sheriff.

Adan told KOB 4 he heard the commissioner’s accusation and replied:

“I am aware of the accusations being asserted by Rudy Garcia, the allegations are utterly false. He contacted me the day after the incident. This incident was reported to law enforcement and Santa Fe County on March 7th, prior to any reelection declaration by Rudy Garcia,” Adan said.

KOB 4 has also reached out to state police to get a copy of the police report Mendoza filed in early March. KOB 4 will update you once that document is shared with us. 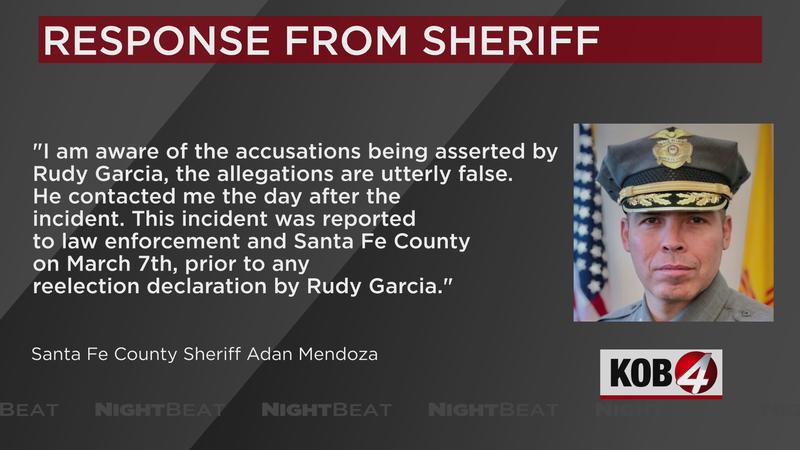