SANTA FE, N.M. — How long will a northern New Mexican man spend in prison for his role in the brutal torture and death of a 13-year-old boy? Jeremiah Valencia’s body was found buried in a plastic container four years ago in Santa Fe County.

Thursday was the third day Jordan Nuñez’s sentencing hearing at district court in Santa Fe. He’s facing up to 24 years in prison for taking part in the child abuse and helping to bury Jeremiah after his death.

During the hearing Thursday, 23-year-old Nuñez sat in the courtroom while listening to testimony, showing no emotion. He pleaded guilty to child abuse and tampering with evidence.

Prosecutors said he was a willing participant in the horrific torture of Jeremiah at the family’s Nambe home – which included keeping him in a dog case, shocking him with a dog collar and stabbing him with a spear.

The defense said Nuñez took part in the abuse because he was afraid of his father, Thomas Ferguson, who used meth and was abusive towards him too. 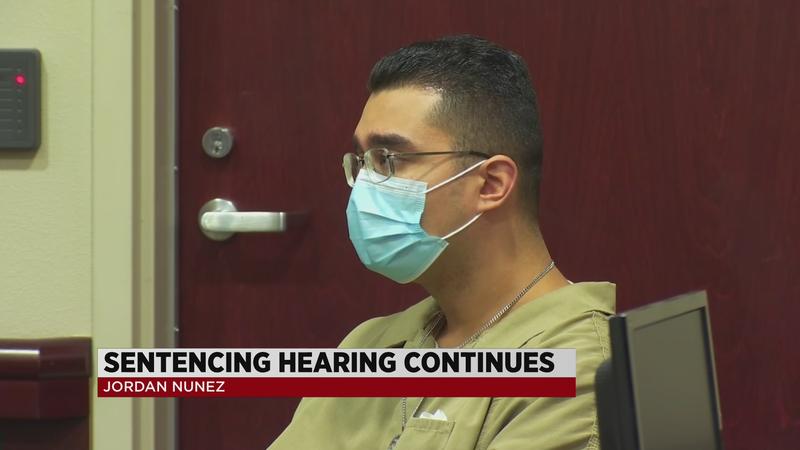 A psychiatrist who testified for the defense Thursday said Nuñez suffered from PTSD, ADHD and learning disabilities. He also talked about Nuñez’s relationship with his abusive father when it came to the abuse of Jeremiah.

"At no time was Jordan very successful in stopping Tommy’s behavior," said Dr. Jeffrey Rowe, a witness for the defense. "All he got was ‘don’t stop me, this is not yours to judge,’ and Jordan became quite afraid that even if he tried to take on Tommy he would fail. Tommy was much stronger and much more capable in a fight."

Nuñez is the last person to be sentenced for Jeremiah’s death. Jeremiah’s mom, Tracy Ann Pena, got a 12-year prison sentence as part of plea deal. Her boyfriend and Nuñez’s father, Thomas Ferguson, died by suicide in jail before his trial. He was the main suspect in the case – accused of torturing and beating Jeremiah to death.

The sentencing hearing will continue Friday.