Serial thief connected to more burglaries, $400K worth of jewelry and damages

SANTA FE, N.M. – Businesses in downtown Santa Fe are getting hit hard by thieves, and KOB 4 learned more than a dozen of them are now linked to the same suspect.

Santa Fe Police say Edgar Guzman is being charged for 18 burglaries since December. Guzman is accused of hitting several galleries near the plaza. In total, Santa Fe Police say he stole almost $400,000 worth of property and caused even more in damages. He was in court where prosecutor’s reviewed his more than two dozen charges.

It was the second time Manitou Galleries had been hit. This time in March and earlier in February. Around $250,000 in stolen art and jewelry and plenty more in damage.

"It’s a huge hit when you’re talking stuff that’s one-of-a-kind that can’t be replaced," said Sandy Swatek, the office manager for Manitou Galleries, one of the businesses near the Plaza that was robbed.

Manitou Galleries showed officers video of this second break-in, showing the suspect and his unwavering attempts to get in.

“This is normally my area and we’ve been having these probably once a night all over downtown at different galleries, same kind of deal. Break the door, break the window,” said a Santa Fe police officer.

Police eventually arrested Guzman for that burglary, but soon after they discovered he may also be on the hook for more than a dozen of others all around downtown Santa Fe.

Prosecutors laid out the list of charges at Guzman’s first felony appearance. The charges and its possible corresponding fees and or jail time.

“He’s looking at a total basic sentence of, I believe it’s 91 and a half years of incarceration,” said the prosecutor.

Monday was supposed to be his detention hearing, but it has been rescheduled that to May 9. At that hearing, we will learn if Guzman will stay locked up before trial. 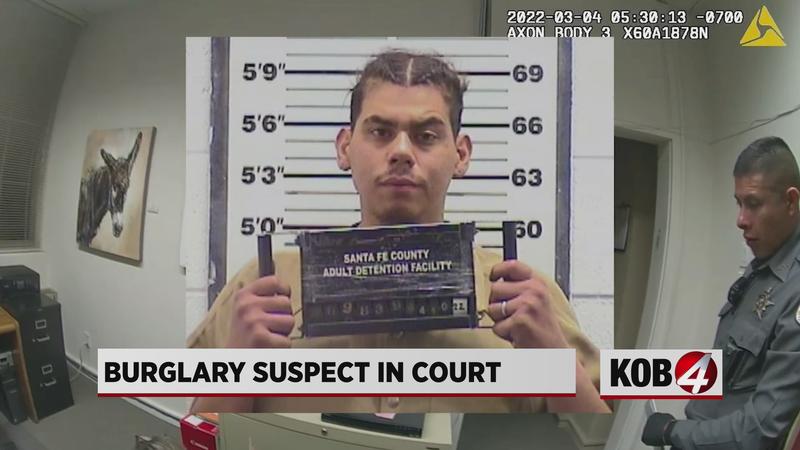