Several APS classrooms are without AC as school year begins

ALBUQUERQUE, N.M. — Parents at several APS schools say their child has been in class with no air conditioning since the beginning of the school year.

“This doesn’t seem to be a good way to really kick the school year off,” said Douglas Osborn, the parent of a fourth grade student at Petroglyph Elementary School.

“He said that it’s hard to focus,” said Jeff Chynoweth, the parent of a fifth grade student at Bandelier Elementary School. “It’s hard to learn when it’s that hot in the room. It’s just not an ideal learning environment for anyone.”

The August heat is almost unbearable for students – and even some teachers.

Officials with Albuquerque Public Schools said they are aware of the issues. It’s a problem that resurfaces every year. APS has 6,500 classrooms and 21,000 AC units.

“We knew and we’ve been telling people for 18 months, in every interview we’ve done, that going back to in-person learning in the middle of a pandemic would look and feel different,” said Monica Armenta, executive director of APS Communications. “This is part of the challenge. It’s not an excuse. It is unfortunately our reality.”

Armenta said they started the week off with nine HVAC techs, and now they have seven. People, she said, are bouncing from location to location. On top of a worker shortage, she said the pandemic has disrupted the global supply chain, so parts are not readily available.

“If you’re in one of those areas where the AC is not currently working, we’ve asked that schools relocate those classrooms to areas of the building where AC is on. We’ve moved classrooms outdoors where that’s an option,” said Armenta. “We’ve purchased just about every single mobile fan that we can.” 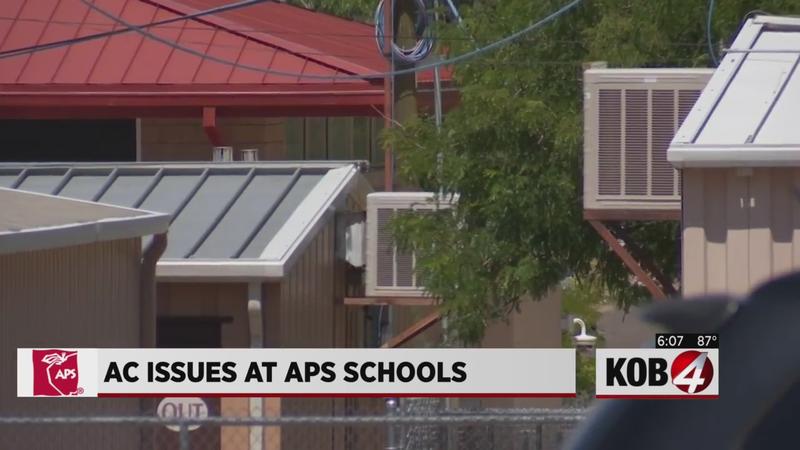 But while parents do not blame the schools, they said it is the administration’s responsibility to create a safe place to learn.

“To me, it should be priority maybe an emergency basis where they reach out to other contractors,” said Chynoweth.

APS officials said they are working as fast as they can.

“All we can say is we’re doing the best we can. It would be unfair and untruthful to tell you that we’re going to fix any of it immediately because we’re in a difficult situation,” Armenta said.

Several parents have reached out to KOB 4 from a number of APS schools. APS released the status of the AC situation at those locations: