SANTA FE, N.M. — The Santa Fe County sheriff and district attorney held a news conference Wednesday morning to present their initial findings from the fatal shooting on the set of "Rust" last week.

No charges have been filed at this time – investigators believe it is too soon to determine if a crime was committed.

Sheriff Adan Mendoza laid out a timeline of the shooting. He said the first deputy arrived 12 minutes after the 911 call and paramedics arrived 13 minutes after.

The sheriff said authorities collected approximately 500 rounds of ammunition from the set – a mix of blanks, dummy rounds and live rounds. They believe they also have the firearm used by Alec Baldwin, along with the spent shell casing.

A "lead projectile" was recovered from director Joel Souza’s shoulder, believed to be the suspected round that killed cinematographer Halyna Hutchins. 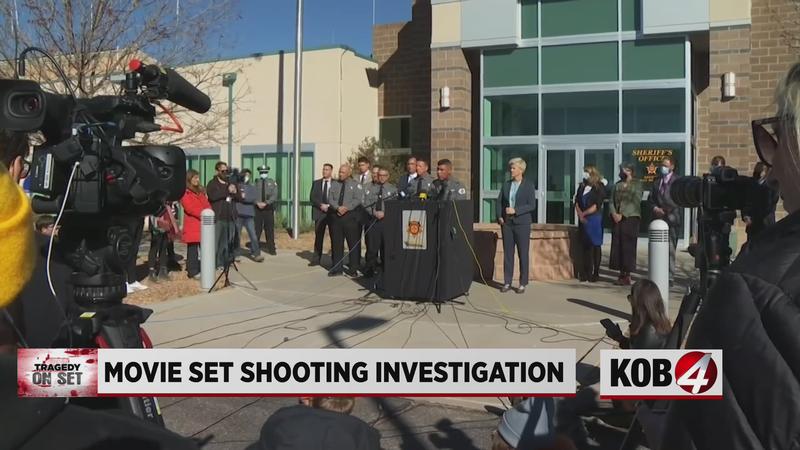 Mendoza also said they recovered what they believed to be additional live rounds on set but they will not be commenting on how they suspect those rounds got there. All evidence will be submitted to the FBI.

Regarding potential charges, Mendoza said it’s still too early to determine if charges will be filed.

"We are not at that juncture yet," said Mary Carmack-Altwies, the Santa Fe district attorney. She made it clear that she will not be pressured by the immense interest in this case to rush to file charges.

Santa Fe authorities also released new search warrants in the investigation, including interviews with the set armorer Hannah Reed-Gutierrez and assistant director Dave Halls – the two people who handled the weapon before Baldwin fired the shot. The sheriff said all those involved have been cooperative at this point.