Some expanded outdoor dining may stick around after pandemic ends

ALBUQUERQUE, N.M.- Some strategies businesses used to survive the pandemic may stick around.

Temporary outdoor seating, like tents outside restaurants, may not be going away soon in Albuquerque.

Friday evening at Tomasita’s, many outdoor tables were filled with people enjoying dinner in pleasant weather, and many say they are still loving the experience under the tent.

"I really like it. It’s enjoyable,” Nathan Gleason said.

Some still feel safer outdoors and really want to have the option. 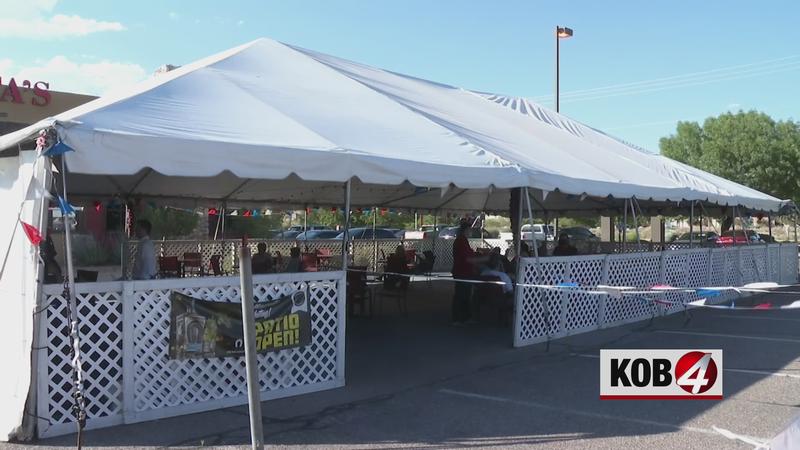 "It’s great. It’s great to be out. A lot of people like myself have been cooped up,” Janica Gothwright said.

The restaurant on Pan American in Albuquerque isn’t even going to consider taking the tent down, at least until they can be at full indoor capacity.

"People feel comfortable outside so we just want to keep on doing the outside for now,” said Noel Colunga, who works at Tomasita’s.

The tent is such a hit, the restaurant wants to build new permanent outdoor seating right up against the front of the building.

Even as New Mexico moves past the pandemic, these temporary seating areas may still be allowed. City of Albuquerque Planning Director Brennon Williams says businesses can keep applying for the necessary permit, and the city will work with them even after the state’s public health order ends.

It was almost exactly a year ago when the city allowed businesses to have this expanded seating on parking lots, sidewalks, or landscaped areas. It even gave out grants to encourage it.

Right now, there are 219 restaurants or retail locations that have taken advantage, according to city officials.

“The sales have been really high (for outdoor seating). We’ve had loyal customers that, because of the patio, we never lost those customers,” Colunga said.

Over at Garcia’s Kitchen on Central, its tent was a life-saver too.

But they’re using it less, and it’ll probably come down soon to make room for more parking.

These restaurants and others are still saying that they still don’t have enough workers to have people at all their tables. Recent hiring events have been slow, they report.