ALBUQUERQUE, N.M. – A lot of schools in New Mexico are feeling the surge more than ever. Some have even opted to move into virtual learning to try and slow the spread of COVID in the classroom.

A lot of parents are torn –people want to protect their children but they also know in-person learning is important.

That’s the case for Santa Fe Public Schools students and those at Valencia High School in Los Lunas. Other schools have already chosen to make this move. So on top of teachers having to switch gears in a hurry, parents say these last-minute decisions are tough on families.

After a year of virtual learning, in the 2021 school year, state leaders made it clear, students need to be in the classroom. Gov. Michelle Lujan Grisham reiterated that message just last week.

But with COVID cases once again on the rise, school districts everywhere are facing even more challenges. Santa Fe Public Schools announced students will shift back to virtual learning starting Jan. 18. The article said in addition to cases, "staffing shortages are placing extreme stress and additional duties on those who remain at work."

Parents chimed in on Facebook, some thanking the district, others frustrated by the short notice asking what working parents are supposed to do.

Meanwhile, in Los Lunas, Valencia High School will also shift to remote learning, due to an "increased number of students and staff needing to quarantine."

“I was OK with it,” said Kathy Mota, a parent of a student at Pecos ISD. “My daughter was not OK with it because it just happened so suddenly.”

KOB 4 talked over the phone to two parents with children at Pecos ISD. They will soon enter week two of virtual learning.

An is the email sent to parents last week – just a half days’ notice before the change – said they’ll go virtual but athletics won’t be impacted. They’re concerned that cases are not being taken seriously enough.

Romero said his whole family just tested positive for COVID, he believes, after his son brought it home from school.

“My issue is like ‘ok well you don’t have to say who did it, or who has it.’ but say ‘hey, your kid was exposed to COVID it was the classroom or basketball and let’s shut them down and do it right,” said Robert Romero, another parent.

Those schools mentioned are hoping to return to in-person learning by Jan. 24, next Monday. That’s if things are getting better.

Meanwhile, schools were required to come up with alternative safety measures this school year–to keep children in school. It’s dependent on the percentage of the population COVID positive. At 5% schools move into those enhanced measures.

Just last week, PED said 12 of the more than 800 schools were above that threshold. 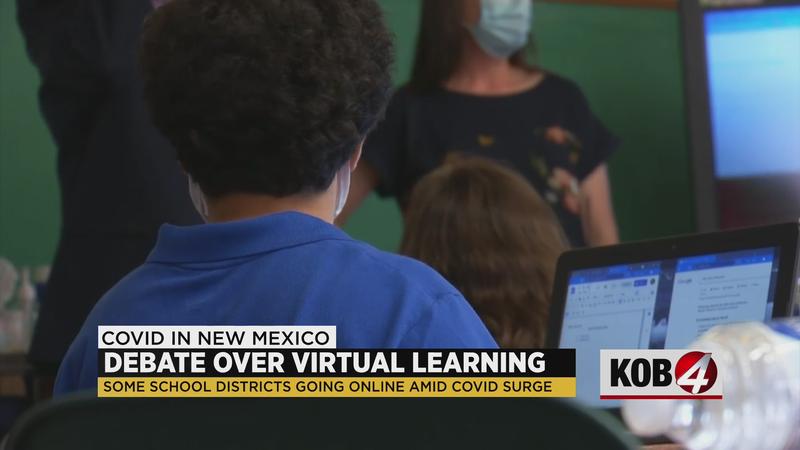